Some 9.3m Syrians are now food insecure, an increase of 1.4m in past six months 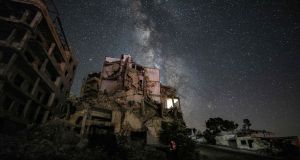 Buildings destroyed by prior bombardment in the town of Ariha in Syria’s rebel-held northwestern Idlib province. Photograph: Omar Haj Kadour/AFP via Getty

Nearly half of Syria’s 20 million people go to bed hungry, World Food Programme chief David Beasley has said ahead of an EU-hosted pledging conference in Brussels on Tuesday.

Mr Beasley said Syrians living in both government and opposition-held territory were in urgent need of food due to more than nine years of war and displacement. The agency says it needs $200 million (€180 million) to cover operations in Syria until November.

“We have to have the money, and we have to have the access. And I don’t mean we need to keep speculating a year from now – we need it now,” he told the BBC. “We’ve got people on the brink of starvation now, and they can’t wait. People will die, and people are dying as we speak.”

He called on world powers to ensure aid could reach opposition-held areas in Syria, as well as those under government control. Iraqi and Turkish border crossings will need to be open for deliveries to displaced people in the north to prevent a fresh exodus towards Europe, where hundreds of thousands sought sanctuary in 2015.

The World Food Programme has already been compelled to cut contents in its food basket, which sustains nearly five million people in Syria. Some 9.3 million Syrians are now food insecure, an increase of 1.4 million over the past six months, according to the agency.

Food prices in Syria are the highest since the conflict began in 2011 due to continued fighting, ramped-up US sanctions and the economic crisis in Lebanon, which until last autumn maintained close financial and trade ties with Syria.

Syrian shops struggle to buy stock as the value of the Syrian pound has plunged dramatically. Before the war it traded at 47 to the dollar; today it fluctuates between 2,400-3,100 to the dollar, reducing average salaries paid in Syrian pounds to $20-$30 a month.

While the Russian and Iranian-supported Syrian army has “won” the war militarily by re-establishing control over 70 per cent of the country, reconstruction cannot begin as long as the government’s international opponents try to bring it down by means of “maximum pressure” modelled on sanctions imposed on Iran, Syria’s ally.

Critics say that rather than the government, this strategy targets the Syrian people, who face hunger and Covid-19.

Meanwhile, Israel has conducted repeated air strikes on pro-government forces while the US-supported Kurdish authority in northern Syria has appealed for help to counter increasing Islamic State attacks and attempts to rescue thousands of fighters’ women and children held in camps since the collapse of the last Islamic State redoubt in Syria.

Clashes have erupted in northwestern Idlib province between al-Qaeda’s dominant Hay’at Tahrir al-Sham and the rival “Be Steadfast” group led by al-Qaeda’s hardline faction, Hurras al-Deen. Although Turkey has thousands of troops in fortified bases in Idlib, Ankara appears to have co-opted Tahrir al-Sham to tame dissident jihadis who establish independent fiefdoms and violate the current Turkish-Russian ceasefire by striking government forces outside the province, risking Russian retaliation.

Heavy fighting in Idlib could, like hunger, unleash a mass flight into Turkey of civilians seeking European asylum.