Opposition newspaper to close as fears grow for Hungary’s democracy 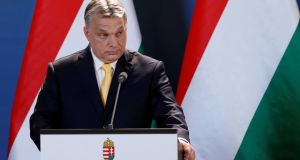 Hungary’s main opposition newspaper is to close just days after prime minister Viktor Orban won re-election, adding to his critics’ concerns for media, NGOs and even a university that the nationalist leader sees as opponents of his rule.

The 80-year-old Magyar Nemzet newspaper and sister station Lanchid Radio will shut down due to financial problems, according to a parent company controlled by Lajos Simicska, a former ally of Mr Orban who became one of his most powerful critics.

Businessmen loyal to Mr Orban will now control all but one of the country’s national dailies and all its regional newspapers, and state television and radio have become tightly controlled government mouthpieces since he took power in 2010.

Mr Orban’s Fidesz party dominated Sunday’s parliamentary election, leaving the opposition in disarray and giving him a free hand to pursue his main policies: keeping refugees and migrants out of Hungary, pushing back against EU “meddling” and cracking down on organisations funded by liberal philanthropist George Soros.

Critics accuse Mr Orban (54) of undermining democracy and flouting the rule of law, but he and his allies now control all key levers of power and dominate business in Hungary, restricting financial flows to opponents like Mr Simicska.

“A huge problem in this election was that people were easily fooled into being afraid of migrants and Muslims,” said Marton Gergely, chief political editor at news magazine HVG.

“Losing [Magyar Nemzet] means Hungarians will now know even less about what’s happening around us, and our immune system will be weakened more to fake news.”

Mr Gergely previously worked at the left-leaning Nepszabadsag, which was Hungary’s best-selling newspaper and a sharp critic of Mr Orban until one of his close allies bought it and shut it down in 2016.

“It’s been like this every time we elected Mr Orban with such a strong majority,” Mr Gergely said of a leader now entering his third consecutive term.

“He acts quickly regarding things which could be unpopular but he sees as needed.”

Mr Orban said on Tuesday that the election, which gave Fidesz a two-thirds majority in parliament, showed that Hungarians were most concerned about “immigration and national sovereignty” and wanted “a Europe of nations and not a ‘United States of Europe’.”

Victory also gave Fidesz a mandate to pursue its “Stop Soros” Bill, Mr Orban said, referring to measures that could see NGOs that allegedly support migration being fined or shut down on grounds of national security.

The EU is suing Hungary over its refusal to accept refugees and for tightening state control over NGOs and the Soros-funded Central European University (CEU) in Budapest, which is seen as a bastion of liberal values in the region.

“Just as a democratic society is unimaginable without civil society organisations, human rights defenders are essential for a strong civil society,” said the Hungarian Helsinki Committee, which is regularly criticised by the government.

“This is even more so now, when an unscrupulous government has gained effectively unlimited power to change the constitution, further dismantle the rule of law and arbitrarily restrict human rights.”

Mr Orban said the government had not discussed the fate of CEU, which announced this week that it would open a satellite campus in Vienna.

The university agreed a deal with a US college to meet new conditions imposed by Hungary, but the government has yet to sign the agreement.

“I assume the government is playing for time,” said Bulcsu Hunyadi, a senior analyst at the Political Capital think tank in Budapest.

“For CEU as a university, a secure environment is very important to attract new students. So I think it might choose the more secure strategy and move to Vienna, step by step.”