Podcast: How will Trump respond to suspected Syrian chemical attack? 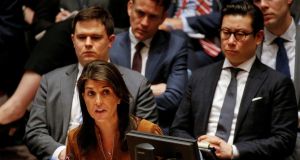 US ambassador to the UN Nikki Haley has accused Russia of having “the blood of Syrian children” on its hands after a suspected poison gas attack in the rebel-held Damascus suburb of Douma.

It comes one year after a similar attack provoked US president Donald Trump to launch cruise missiles at a Syrian airbase. What will his response be this time? Ruadhán Mac Cormaic reports.

Also on the podcast: Traditional media has little access to the war in Syria, while online propaganda favouring all parties to the conflict is rife.

So how do we know what to believe? Individuals “in search of the truth” about the war can visit to find out for themselves on specially-organised tours. But they don’t always get what they bargained for, explains Sally Hayden.

He has the latest on the mood in Budapest, amid signs the free press is beginning to wilt under the pressure of Orban’s control.