Mixed martial arts fighter Xu Xiaodong has come under fire in China for allegedly disrespecting Chinese culture by beating Wei Lei, a tai chi master, in around 10 seconds into a fight between the two 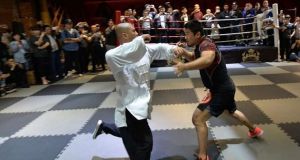 On one side of the fight zone in the Yichan club, a bulky mixed martial arts fighter shakes out his muscles and bounces from foot to foot. On the other, a tai chi master in white silk jacket and black pants holds his fists up high in traditional Chinese style.

Just 10 seconds later, 38-year-old MMA coach Xu Xiaodong floored his opponent Wei Lei (41) and pounded him into submission in a whirlwind of brutality and aggression.

For many viewers in China it was a stark illustration of how fighting arts have changed – like a cavalry charge against a tank battalion.

The fight in Chengdu, Sichuan province, late last month was streamed live on Mr Xu’s social media account and has sparked a major bout of soul searching over the future of traditional martial arts in the face of international fighting sports like MMA.

Although these are ancient and complex disciplines, Chinese martial arts can be lumped together under the heading of “wushu”, which includes tai chi and kung fu. These days, tai chi is better known as a form of exercise to improve health. Retirees do the slow, graceful movements every morning in parks and town squares.

The growing popularity of Asian martial arts around the world, combined with the explosion of kung fu films, from Bruce Lee’s Enter the Dragon to Kung Fu Panda, has seen a major revival in China of traditional fighting styles.

Mr Xu, an online celebrity who has also studied kung fu, said that most tai chi masters were frauds out to make money and he wanted to expose them as cheats.

Since he defeated Mr Wei, he has gone into hiding, saying he has been the subject to death threats.

The initial response from the government-controlled tai chi lobby has been dismissive of the Xu-Wei bout.

Shao Shiwei of the martial arts section of the General Administration of Sports said the fight was a “childish publicity stunt”.

“It means nothing, no matter who won,” he told the China Daily newspaper. He praised tai chi’s ability to beat depression.

“There are many self-proclaimed martial arts masters in China who like to exaggerate the power of traditional martial arts just to make money,” said Mr Shao.

Ma Yongzhi, a professor and wushu coach at the department of sports science and physical education of Tsinghua University, hoped the fight would push kung fu practitioners to improve their combat skills.

“With the country’s rapid economic development and social transition, the golden days of wushu are gone. In modern China, wushu is more treated as a performance art rather than fighting skill,” Mr Ma said in a commentary.

And tai chi could soon face competition from MMA for young adherents. China’s leading MMA prospect, Li Jingliang, has said that the crowning of a Chinese mixed martial arts champion could usher in mass support for cage-fighting in the world’s most populous nation.