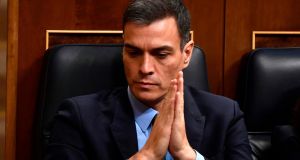 Spanish prime minister Pedro Sánchez during a debate on the government’s budget in parliament in Madrid on Wednesday. Photograph: Pierre-Philippe Marcou/AFP/Getty Images

Opposition parties in Spain are calling for a snap general election after Catalan secessionists joined right-wing parties in rejecting the socialist government’s national budget on Wednesday.

The prime minister, Pedro Sánchez, had faced an uphill battle to secure approval for the 2019 budget in the face of opposition from critics of his minority government.

Mr Sánchez’s PSOE, which holds 84 of the 350 seats in Congress, relied on the support of Basque and Catalan nationalist parties to seize power from the conservative Partido Popular (PP) in a confidence vote last year.

But the two main Catalan pro-independence parties – the Catalan Republican Left and Catalan European Democratic party – voted with the right-wing PP and centre-right Ciudadanos. The budget was defeated by 191 to 158, with one abstention.

Mr Sánchez is due to make an announcement on his next step on Friday after the weekly cabinet meeting, amid speculation he could call a snap election in April or May. It would be the country’s third general election in less than four years.

The next general election is due to be held next year.

PP leader Pablo Casado described the budget defeat as “a de facto confidence vote” against the prime minister. “Today in congress, we’ve spearheaded a decision, which, I think, marks a turning point in the legislature,” he said. “Or, to put it another way, it marks the end of Pedro Sánchez’s time as prime minister.”

Ciudadanos leader Albert Rivera said Mr Sánchez had lost and Spain had won, adding that an election needed to be held as soon as possible.

Mr Rivera hit out at both the PSOE’s protracted efforts to have Franco’s body removed from its tomb and the PP’s recent focus on revisiting Spain’s abortion laws.

“To stop [Catalan] separatism and unite Spaniards and to speak of the future instead of Franco or abortion, we have to look ahead,” he said. “We want elections now.”

Government and PSOE party sources said the election date had not been set, although April 14th was most likely, followed by April 28th because Mr Sánchez wants a ballot as soon as possible to mobilise left-leaning voters against the threat of the right coming to power.

The socialists are ahead in opinion polls – which show them on about 30 per cent of voting intentions – but the two main right-of-centre parties together poll at more than 30 per cent . In Spain’s most populous region of Andalucía, they unseated the socialists last year with the help of the far-right party Vox.

The prime minister had been banking on the fact that the prospect of an early election – and a possible win for right-wing parties that fiercely oppose Catalan secession – would make the Catalan parties swing behind the budget.

Efforts to find a political solution to the independence crisis have been hampered by pressure from right-wing parties – and by the start of the trial in Madrid on Tuesday of 12 Catalan separatist leaders.

On Sunday, tens of thousands of people joined a rally in central Madrid to vent their fury at what they see as the overly conciliatory stance adopted by Mr Sánchez, and to demand a snap general election.

On Wednesday, a prosecutor at the supreme court hit back at suggestions that the Catalan trial was politically motivated.

“This is a trial in defence of Spanish democracy and constitutional order,” Javier Zaragoza told the court.

“This court will administer justice impartially and guarantee both the rights of the accused and a fair trial.”

The previous day, the lawyer for two former Catalan government ministers had dismissed the complex trial as a “procedural vaudeville” and said its aim was to put Catalan independence itself in the dock. – Guardian/Reuters