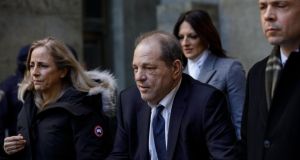 Harvey Weinstein’s plea came as it was reported he had suffered a fall in his cell at Rikers Island prison. Photograph: Anna Watts/New York Times

Harvey Weinstein’s lawyers have petitioned the judge who presided over his trial and rape conviction in a New York court to sentence him to the minimum of five years in prison, citing the fallen producer’s “remarkable accomplishments”.

The disgraced mogul’s defence team, led by Donna Rotunno, are pleading for the lightest possible sentence. Judge James Burke will reconvene at the New York supreme court at 9.30am on Wednesday to deliver his sentence, which could be as severe as 29 years in prison.

A letter from Ms Rotunno and her fellow lawyers, addressed to the judge, contains praise for the convicted rapist that is certain to incense the 105 women who have come forward to accuse him of various degrees of sexual misconduct.

The note says: “His life story, his accomplishments, and struggles are simply remarkable and should not be disregarded in total because of the jury’s verdict.”

Weinstein was convicted last month of forcing oral sex on a production assistant, Miriam Haley, and raping another woman. The upper sentences for the two counts are 25 years and four years respectively.

Weinstein’s plea came as it was reported he had suffered a fall in his cell at Rikers Island and as a batch of documents relating to the trial were unsealed. The documents revealed that soon after allegations against him were exposed in 2017 he said he harboured suicidal thoughts.

The New York Daily News reported that Weinstein expressed despair in a draft statement written in December that year.

It said: “I have lost my family. I have daughters that will not talk to me. I have lost my wife. I have lost the respect of my ex-wife and generally almost all of my friends. I have no company. I’m alone. And I will be honest with you: I’m suicidal.”

Any suggestion of suicidal inclinations, however tenuous, are likely to be treated very seriously by the New York state department of corrections, which will be in charge of Weinstein’s incarceration once the sentence comes down.

New York is still reeling from the death of the convicted sex offender Jeffrey Epstein last August, which though it happened in a federal prison will be regarded by state officials as a cautionary tale. Epstein’s death was ruled a suicide.

The Daily News also published an email to Weinstein from his brother and business partner Bob Weinstein dated November 2nd, 2017, weeks after the New York Times and the New Yorker disclosed the Pulp Fiction and Shakespeare in Love producer’s long history of sexual harassment and assault.

In the searing email, Bob said: “I pray there is a real hell. That’s where you belong.”

In a pun on the Oscar awards, the brother added: “[You] deserve a lifetime achievement award for the sheer savagery and immorality and inhumanness, for the acts [you] have perpetrated.”

The New York Times reported that the documents included “a desperate plea for help in emails to two dozen influential people, including the billionaires Michael Bloomberg and Jeff Bezos” and a claim that “Jen Aniston should be killed”, written as he believed, erroneously, that the actor had accused him of groping.

At the sentencing hearing on Wednesday, both main accusers who were party to the two convictions are expected to deliver victim-impact statements. Weinstein’s lawyers will also make a recommendation for the sentence, presumably following the five years already suggested.

The judge will have to weigh up starkly different interpretations of Weinstein’s behaviour. While the defence lawyers praised his “accomplishments”, lead prosecutor Joan Illuzzi-Orbon last week sent the judge a withering litany of the fallen Hollywood titan’s alleged sex crimes, dating back to the 1970s.

Without stating a desired sentence, the prosecutor urged the judge to throw the book at Weinstein, whom she said had led “a lifetime of abuse”.

He had, she said, shown “total lack of remorse for the harm he has caused” and a “staggering lack of empathy, treating others with disdain and inhumanity”. – Guardian