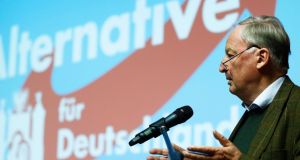 The dozen patrons outside Café Diana watch with quiet interest as two buses pull up before them in Frankfurt. We’re not in Germany’s finance capital, with its banks and skyscrapers, but in the other Frankfurt: a low-rise town on the eastern River Oder, bordering Poland.

An hour west, and a world away, from Berlin, this town of 58,000 has lost almost a third of its population since German unification. Although the town has scrubbed up in recent years, above-average unemployment and crime rates mean one in five voters are set to give their vote this month to the far-right Alternative für Deutschland (AfD).

From their buses the AfD team pull a stand, a sound system and a barbecue. Soon the aroma of sizzling sausages reaches the windows of Café Diana, bearing the slogan: “Let yourself be seduced.”

Eating his free sausage, Stefan, who is 63, says the AfD has his vote on September 24th, the first time he has voted since 2002. “I worked 40 years, my back and kidneys are shot, and I have a disability allowance of €800 a month,” he said, “while immigrants come in with half a dozen children and get thousands.”

About 400 refugees have been housed in Frankfurt on Oder, and even the AfD concedes there have been no incidents since they arrived. But the party sees political potential in people’s fears about what might happen.

The AfD began life in 2013, in protest against European Union bailouts, but after a sharp right turn it made the 2015 refugee crisis its own. Now sitting in all but three of Germany’s 16 state parliaments, the party is impatient to get into the Bundestag. So much so, in fact, that locals on Frankfurt’s town square can spin a wheel to win a Bundestag tour with the prospective MP Alexander Gauland, a leader of the AfD campaign.

“As opposition we will use the Bundestag as a sounding board for people’s concerns, which we take seriously,” says Gauland when he arrives, three hours late. “If the other parties had done that, and they had enough time to, we wouldn’t be here.”

Germany’s other parties are resigned to the looming watershed: the Bundestag’s first conservative-liberal populist party with a vocal racist and xenophobic streak.

Late last year the AfD adopted a strategy paper identifying “targeted provocation” as a vote-winner. Party leaders have outdone themselves in the meantime, with attacks on Germany’s “guilt cult”, a neo-Nazi term.

In Frankfurt it is demanding permanent border checks to Poland, a popular move against eastern European gangs accused of stealing everything from cars to cattle. In its strategy paper the party sees itself as a “collection reservoir for protest” that taps into insecurities surrounding asylum, Islam, security and, to a lesser extent, the euro crisis.

The AfD bus in Frankfurt reflects the party’s catch-all ambitions, with slogans that run the gamut from “Our Land, Our Rules” to “Make Work Worthwhile Again”. Watching from a safe distance, a Polish teenager, Roch, describes himself, in perfect German, as “a living example of the kind of integration the AfD resent”. “They’re remarkable in how they grab the hot issue just at the right moment,” he says.

This skill has seen the AfD outgrow its protest origins in just four years to pull in a diverse following.

“Because it feeds on . . . feelings of fear and disappointment, patriotism and wish for freedom, it has overcome social groups and political camps,” the Der Spiegel journalist Melanie Amann argues in a recent AfD book. “Not all AfD fears are irrational . . . but from the fear and disappointment comes a fury that leaves many AfD voters inaccessible for compromise.”

After watching closely Donald Trump’s electoral victory, the AfD has mined a similar seam of discontent here and recruited some of Trump’s online marketeers for a microtargeted social-media push.

As election day approaches, the party has come under attack from all sides. In Frankfurt on Oder, a local official says a third of its posters have been destroyed, and AfD leaders appear in public now only with armed guards. Chancellor Angela Merkel has called Gauland racist; her foreign minister, Sigmar Gabriel, sees the party as Nazis.

AfD officials play a double game: condemning extremists in public as bad apples while giving them latitude, for instance, to attack Berlin’s Holocaust memorial as a “monument of shame”. Less important regional leaders have been sacrificed, such as the man who demanded, in a leaked WhatsApp transcript, that left-wingers be guillotined.

Scandals and attacks have done little to dent the enthusiasm of its supporters, who, analyses show, are far from the extremist cliche. They’re middle-aged, middle-income and middlingly educated voters. Despite internal feuds, and investigations of opaque party funding from Switzerland, the party has held together.

“And it won’t disappear so quickly, either, because it fills a broad gap in the political offering,” said Prof Werner Patzelt, political scientist at the Technical University Dresden.

While polls suggest the party could win up to 70 seats in the 630-seat parliament, Patzelt suggests that not every potential AfD voter will admit to being one. “One shouldn’t be surprised if the AfD performs better on election day than we expect at present,” he said.

After the three-hour wait, with the free sausages all eaten, a crowd of 70 has gathered in a hall to hear Alexander Gauland speak. A disappointed former member of Angela Merkel’s Christian Democrats, the 76-year-old crosses the tweed jackets and novelty ties of the landed gentry with the cantankerous tone of an ageing German academic.

“We don’t want to be the world’s doormat. It’s not our job in Germany to resolve the world’s misery,” he says. “Our country is gradually being lost so that we are strangers here, and we as the AfD don’t want that.” The crowd cheers.