US wars since 9/11 have displaced at least 37 million people, study finds 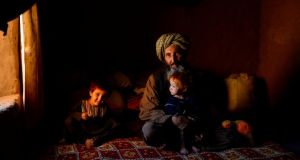 An internally displaced man sits with his children at a temporary home in a refugee camp on the outskirts of Herat on September 2nd. Photograph: Hoshang Hashimi/AFP via Getty

US wars have displaced at least 37 million people around the world in the past 19 years, Brown University’s Costs of War project has found.

This 30-page survey, Creating Refugees, is the first “to measure comprehensively how many people these wars have displaced” since president George W Bush launched his “war on terror” following the September 11th, 2001, al-Qaeda attacks on New York and Washington.

This figure covers eight countries where the US initiated conflict and US involvement has been dominant: Afghanistan, Pakistan, Iraq, Syria, Libya, Yemen, Somalia and the Philippines. The toll “exceeds those displaced by every war since 1900,except World War II”.

The “conservative” estimate could even “be closer to 48-59 million”, states the report. In all eight countries conflict continues and people are still fleeing, becoming internally displaced, refugees, and asylum seekers.

Numbers cannot reflect dispossession or “communicate how it might feel to lose one’s home, belongings, community, and much more,” asserts the report.

“Millions more have been displaced by US troop participation in “smaller combat operations” in Saudi Arabia, Tunisia and eight Sub-Saharan African countries.

The report provides details for the eight most impacted countries. Among the three suffering the highest numbers of mostly civilian displacements are Iraq and Syria with 37 per cent of their pre-war populations and Afghanistan with 26 per cent.

“In Iraq, for example, sectarian fighting and displacement following the 2003 US-led invasion destroyed what had been a ‘mosaic patchwork’ of mixed communities, in which Shia and Sunni and other religious and ethnic groups lived side-by-side, working together and intermarrying,” the report says.

“What replaced it was an Iraq divided into three large ethno-sectarian regions defined by increasingly homogenous Shia, Sunni and Kurdish identities. In cities like Baghdad, US forces contributed to the hardening of ethno-sectarian divisions.”

Along with fatalities and injuries, internal displacement and refugeedom “must be central to any analysis of the post [2001] wars and their short- and long-term consequences,” the report states.

The report does not say the US is “solely” to blame, but contends displacement of tens of millions “raises the question of who bears responsibility for repairing the damage inflicted on those displaced”.

While the US has “accepted hundreds of thousands of refugees, most have been hosted by countries in the greater Middle East,” the report says.

Although 25.3 million no longer count as displaced persons or refugees this “does not erase the trauma of displacement or mean that those displaced have returned to their original homes or to a secure life.”

Some are children born in exile or far from their families’ natal villages and towns and “return to places and homes they have never known.” Others may be fleeing violence or suffering deportation by host countries.