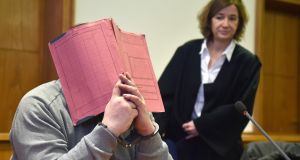 Niels Hoegel: before his second trial the nurse told a forensic investigator he was “addicted to this feeling of having done something good, a feeling that sometimes lasted days”. Carmen Jaspersen/AFP/Getty Images

German police revealed on Thursday how a male nurse may have murdered at least 106 patients in his care, a tally which would make him Europe’s most prolific serial killer.

In 2015 Niels Högel was sentenced to life in prison for murdering six patients in two clinics in Oldenburg, near Bremen, but police said at the time they were examining a further 16 cases.

Now, after 130 exhumations of patients who died on his watch, the number has reached 106 but may have been higher as some victims were cremated.

Högel (40) was an intensive care nurse who injected patients with medication to cause cardiac arrest, allowing him to reanimate them and earn the respect of his colleagues. He earned the name “Rescue Rambo” during his five-year nursing career until 2005. Some 62 patients died on his watch in one clinic and he was forced out by management. Some colleagues in his first clinic viewed him as a ward “jinx” and some refused to work shifts with him. After three years he was eased out with a letter of recommendation.

At his second hospital he continued killing patients – at least 38 died during his shifts – until a colleague caught him in the act of injecting a patient with unprescribed heart medication. The patient survived and Högel went on trial and was sentenced in 2006 for attempted manslaughter. Ahead of his second trial in 2015 Högel admitted he had lost count of how many patients he had injected.

“To be honest I stopped counting after 50,” he told police investigators.

After two previous cases and six convictions, Högel is likely to go on trial a third time in the new year. A special murder commission examined all deaths where he was involved and says that, in the majority of cases, the deaths could have been prevented if anyone had noted the spike in death and reanimation rates during the Högel’s shifts.

Before his second trial the nurse told a forensic investigator he was “addicted to this feeling of having done something good, a feeling that sometimes lasted days”.

Psychiatric assessors suggested Högel was suffering from a condition known as “Munchausen by Proxy” syndrome, which involves causing harm in order to act as an angel of salvation.

The case has prompted calls for tighter audits of ward medication and closer oversight of death statistics.