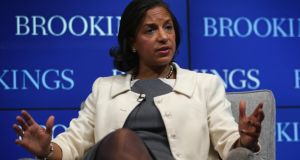 President Barack Obama has identified Russian aggression and Islamic extremism as concerns but stresses no single threat or region would dominate America’s focus.

The Obama administration yesterday published its second and final national security strategy, updating the president’s cautious foreign policy doctrine and setting out priorities for his final two years in power.

Aiming to avoid a repeat of costly, large-scale ground wars in Iraq and Afghanistan, the president, in a 29-page memo to Congress, warns against “over-reach” when making decisions based on fear.

Mr Obama cautions against the use of military force, saying the US could not “dictate the trajectory of all unfolding events around the world”.

It should pursue a “more sustainable approach” of targeted action against violent extremism with “responsible partners”.

Susan Rice, Mr Obama’s national security adviser, said in a speech coinciding with the release of the strategy, an update of Mr Obama’s 2010 foreign policy road-map, that US must “walk and chew gum at the same time” in dealing with immediate crises and long-term threats.

While accepting Islamic State extremists were dangerous and Russian aggression was a “grave concern”, they were not threats of an “existential nature” like the second World War or the cold war, she said.

She stressed the US could not neglect or leave untapped opportunities in parts of the world unaffected by short-term crises.

The US “cannot afford to be buffeted by alarmism and a nearly instantaneous news cycle”, she told ambassadors and foreign policy analysts at the Brookings Institution think tank in Washington.

The White House rejects a more defined strategy to deal with what foreign policy experts see as the decline of the international order, a return to geopolitics and the weakening of Middle East states.

“This strategy eschews orienting our entire foreign policy around a single threat or region,” says the administration. “It establishes instead a diversified and balanced set of priorities appropriate for the world’s leading global power with interests in every part of an increasingly connected world.”

Stepping back from campaign assurances that the terror threat was declining, the White House noted the “persistent threat of terrorism” as the Middle East and North Africa are embroiled in a “generational struggle” after the 2003 Iraq war and 2011 Arab uprisings.

In sharp contrast with the co-operative approach towards Russia in Mr Obama’s previous strategy, the White House said the violation of Ukraine’s sovereignty “endangers international norms that have largely been taken for granted since the cold war”.

The administration is “making it clear that it does not want to be defined by the return of geopolitics”, said Tom Wright, a foreign policy research fellow at the Brookings Institution.