US protests have come and gone. This movement looks here to stay 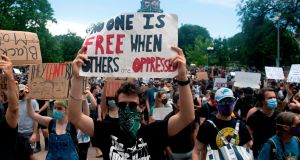 Ever since people across the US began pouring into the streets to protest police violence, Dakota Patton has driven two hours each day to rally on the steps of the Colorado State Capitol. He has given up his gig jobs delivering food and painting houses. He is exhausted. But he has no plans to leave.

“This is bigger,” says Patton (24). “I’m not worried about anything else I could be doing. I want to and need to be here. As long as I need.”

As Monday marks two full weeks since the first protest sparked by the killing of George Floyd, the massive gatherings for racial justice across the country and now the world have achieved a scale and level of momentum not seen in decades. And they appear unlikely to run out anytime soon.

Streets and public plazas are filled with people who have scrapped weekend plans, cancelled meetings, taken time off from work and hastily called babysitters. Many say the economic devastation of the coronavirus had already cleared their schedules. With jobs lost and colleges shuttered, they have nothing but time.

“This feels like home to me,” said Rebecca Agwu (19), who lost her campus job in the pandemic. She spent five days at the Denver protests, and spent a recent afternoon chatting in the shade of the boarded-up capitol building with three other women who had been laid off from their mall jobs.

On Sunday, as protesters continued gathering around the country, their growing influence was apparent as local leaders vowed to curb the power of the police. Mayor Bill de Blasio pledged to cut the budget for the New York Police Department and spend more on social services in the city.

In Minneapolis, nine city council members – a veto-proof majority – publicly promised to create a new system of public safety in a city where law enforcement has long been accused of racism.

De Blasio also cancelled the nightly curfew that he imposed last week. And President Donald Trump said on Sunday that he had ordered National Guard troops to begin withdrawing from Washington.

Raids and arrests broke up protest encampments over an oil pipeline in North Dakota near the Standing Rock reservation and at the heart of Occupy Wall Street in years past. But protesters now say that aggressive responses by the police are only reinforcing their commitment to return to the streets. After police last week used flash grenades and a chemical spray to clear peaceful protesters from Lafayette Square in front of the White House, even more people began showing up.

One recent afternoon in Washington, one person among hundreds of demonstrators shouted that they would all be coming back the following day. Another person added, “and the next day”. The phrase caught fire, and the crowd started chanting, “And the next day! And the next day!”

“If I’m the next hashtag, hopefully people will be out here for me too,” said Andrew Jackson, a 25-year-old government contractor who had joined protesters in Washington. Jackson said his own experiences of police abuse had compelled him to cut back on his work hours and join the rallies: An officer once pointed a gun at his head, and the son of a neighbour had been shot and killed by the police, he said. “I’ll come out day after day after day.”

Because the protests are not only about the death of Floyd but a broader system of racial inequality, officials cannot simply defuse concerns by pressing charges against police officers, as they did in Baltimore after the death of Freddie Gray.

In Minneapolis, activists said they did not believe the movement would lose oxygen simply because the officer who knelt on Floyd’s neck for eight minutes and 46 seconds and three others who were at the scene had now been charged.

“I’ve been attending protests as far back as I can remember,” said Raeisha Williams, who brought her toddler son along to a protest she helped organise last week in downtown Minneapolis. “And I plan to keep attending them until the system actually changes.”

People around the world – in Australia, Britain, France, Germany and beyond – have defied public health rules against mass gatherings to show solidarity with American protesters, who have now taken to the streets in more than 150 cities.

Activists and scholars who have studied the crest and fall of other uprisings over police killings, school shootings, women’s rights and immigration detentions say that the widespread outrage over economic and racial injustices may give the new movement a greater durability.

“There was a wash, rinse, repeat cycle, a standard script,” said Jody David Armour, a law professor at the University of Southern California who studies racial justice. “Convene a commission, hold some hearings, have community members vent and testify, and here come some policymakers saying, ‘Here’s a fix’.”

The result, he said: “Look where we are.”

“My entire life has changed since taking to the streets,” she said. On Wednesday, shortly after charges against the four officers in the Floyd case were announced, she rallied more than 500 people, carrying placards with slogans such as “Black Lives Matter More Than Windows” and “4 Killer Cops 4 Convictions”. She said the officers could be tried by an all-white jury; they could be acquitted.

“We have to continue to be vigilant. We can’t rest,” she told the crowd, her voice rising. She added: “We got to keep marching. Keep demonstrating. Keep speaking the truth. Keep protesting.” The crowd, in front of the TV station where the wife of the head of the police union works as an anchor, erupted in cheers and applause.

Community organisers say some of the energy now coursing through the street will eventually ebb. But they say the Floyd protests appear to be creating a new generation of activism out of deep, widespread anger. There is outrage: At police killings of black men and women. At economic inequality when 13 per cent of Americans are out of work. At failed political leadership during a pandemic that has killed more than 100,000 Americans.

“You’re watching injustice take place in every sector of our society,” said Wes Moore, who chronicles Freddie Gray’s death and its aftermath in the book, Five Days. “Schools have been closed. Students are burdened and under debt. There’s a compounding to the pain.”

In South Florida, activists said they were trying to sustain the energy of this moment by signing up volunteers, holding trainings and making sure people had a lift or gas money to get to the multiple daily protests that are happening.

“In the past we have seen where momentum would have gone away, but now we are seeing people want to know how to plan protests,” said Tifanny Burks, a member of the Black Lives Matter Alliance in Broward County, Florida. “I see a shift.”

Asa Rogers-Shaw (30), a Black Lives Matter activist in Fort Lauderdale, said he did not protest every day. He was focusing his efforts on crafting strategies to ensure the protesters had tools to sustain the protest. Organisers in Broward County held a virtual training session on Wednesday night to teach protesters to continue their activism through “direct actions”. More than 200 people signed up.

“If you cover the arc of these moments, you know the energy is going to dissipate eventually,” Rogers-Shaw said. “ It’s how much of that residue can we hold on to.”

Activists across the country say that while the news media may pay attention when buildings burn or another black person is killed, their protests and calls for reforms have never ceased. In Ferguson, Missouri, where Michael Brown, a black 18-year-old, was shot dead by a white police officer in 2014, residents and Black Lives Matter activists have spent nearly six years working to change the city’s courts, police policies and political leadership. Last week, Ferguson elected its first African-American mayor, Ella Jones.

In Baltimore, the family of Tyrone West, who died after a struggle with the police in 2013, has gathered in the street every Wednesday to call for justice in his death and commemorate victims of police brutality.

In Los Angeles, Black Lives Matter activists have demonstrated downtown against police abuses every Wednesday for more than two years, often drawing just a couple of dozen people. But last week, thousands came, underscoring how the outrage at Floyd’s killing has catalysed the work that local activists have been carrying out for years.

Valerie Rivera, whose son Eric was killed by police in 2017, said she was glad the others were joining her. “We have been waiting for these days to come, for these people to stream into these streets,” she said. – New York Times