Edward Colston: Who was he and why was his Bristol statue toppled? 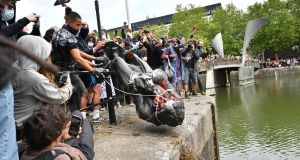 The statue of slave trader Edward Colston that was toppled from its plinth and pushed into the docks by protesters has long caused anger and divided opinion in Bristol in the UK.

The 5.5-metre (18ft) bronze statue had stood on Colston Avenue since 1895 as a memorial to his philanthropic works, an avenue he developed after divesting himself of links to a company involved in the selling of tens of thousands of slaves. His works in the city included money to sustain schools, almshouses and churches.

Although Colston was born in the city in 1636, he never lived there as an adult. All his slave-trading was conducted out of the City of London.

Colston grew up in a wealthy merchant family in Bristol and after going to school in London he established himself as a successful trader in textiles and wool.

In 1680 he joined the Royal African Company (RAC) company that had a monopoly on the west African slave trade. It was formally headed by the brother of King Charles II who later took the throne as James II. The company branded the slaves – including women and children – with its RAC initials on their chests.

It is believed to have sold about 100,000 west African people in the Caribbean and the Americas between 1672 and 1689 and it was through this company that Colston made the bulk of his fortune, using profits to move into money lending.

He sold his shares in the company to William Prince of Orange in 1689 after the latter had orchestrated the Glorious Revolution and seized power from James the year before.

Colston then began to develop a reputation as a philanthropist who donated to charitable causes such as schools and hospitals in Bristol and London. He briefly served as a Tory MP for Bristol before dying in Mortlake, Surrey, in 1721. He is buried in All Saints Church in Bristol.

His philanthropy has meant the Colston name permeates Bristol. Besides the statue, there is Colston’s, an independent school, named after him, along with a concert hall, Colston Hall, a high-rise office office block, Colston Tower, Colston Street and Colston Avenue.

Campaigners have argued for years that his connections with slavery mean his contribution to the city should be reassessed. It was decided in 2018 to change the the statue’s plaque to include mention to his slave-trading activities but a final wording was never agreed.

A petition that gathered thousands of signatures in the past week said he had “no place” in the city.

“Whilst history shouldn’t be forgotten, these people who benefited from the enslavement of individuals do not deserve the honour of a statue. This should be reserved for those who bring about positive change and who fight for peace, equality and social unity,” the petition reads.

“We hereby encourage Bristol city council to remove the Edward Colston statue. He does not represent our diverse and multicultural city.”Bristol Museums has sought to explain the reason for Colston’s statue remaining the city and says on its website that “Colston never, as far as we know, traded in enslaved Africans on his own account”.

But it added: “What we do know is that he was an active member of the governing body of the RAC, which traded in enslaved Africans, for 11 years.”–Guardian