George Floyd death: Teenager dies in clashes as protests spread across US

Civil unrest is spreading across many American cities - with rioting continuing in Minneapolis on the third day - as anger flares in the wake of George Floyd's death at the hands of police. Video: Reuters/CNN 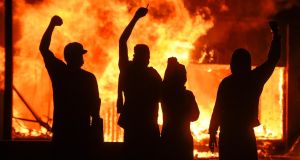 Rioters are seen in front of a store set ablaze during protests following the death of George Floyd in Minneapolis. Photograph: EPA

Protests erupted across the United States on Friday night, as the death of George Floyd on Monday reverberated across the country.

Demonstrators clashed with police in several cities including New York, Washington DC, Atlanta, Dallas and Los Angeles in some of the worst scenes of rioting in United States in recent years.

In Detroit, a 19-year-old man was killed after shots were fired into a crowd from from a vehicle.

In Washington DC, thousands of protestors marched to the White House, chanting “Black Lives Matters” and “No Justice, No Peace, No Racist Police.” Demonstrators of all ages and races took part in the protests in the heart of the US capital which saw some protestors face off with secret service officers outside the White House while US president Trump and his family were inside.

In Minneapolis, the city where George Floyd died after a police officer pressed his knee on Mr Floyd’s neck on Monday, widespread demonstrations took place in defiance of an 8pm curfew set by the city’s mayor as the city prepared for a fourth night of violence. While some of the crowd had dispersed by 8pm, protestors remained on the streets – many near the police precinct that was burned the night before.

On the west coast of the United States, violent scenes took place in Los Angeles where protestors’ interactions with police descended into violence.

Video footage of the incident showed Mr Floyd handcuffed and pinned to the ground by police officers on the side of a street. One of the police officers pressed his knee to Mr Floyd’s neck.

The detained man can he heard groaning, and repeatedly saying “I can’t breathe,” before he stops speaking.

The scene tonight at the White House, #WashingtonDC. Crowds chanting #BlackLivesMatter in protest at death of #GeorgeFloyd in #Minneapolis pic.twitter.com/gd58SPzMHx

He later died in police custody.

The officer filmed placing his knee on Mr Floyd’s neck, who was named as Derek Chauvin, was charged with third-degree murder and manslaughter on Friday.

Hennepin County Attorney Mike Freeman said further charges could be brought. Investigations into the other three police officers – who like Mr Chauvin were fired earlier this week – were ongoing, he said.

The death of Mr Floyd has sparked outrage across the US, raising comparisons with previous examples of black men who died while in police custody, including Eric Garner who died after being held in a chokehold by a New York police officer in 2014.

At a press conference on Friday, Minnesota’s governor Tim Walz, who was forced to deploy the National Guard, called for calm.

While he said the name of George Floyd had now joined the names of other black victims of police violence such as Rodney King and Eric Garner, he said: “We have to restore order to our society before we can turn to [these] issues.”

“We cannot have the looting and recklessness that went on,” he said as he appealed for calm last night.

He acknowledged there was an absence of trust between his community and law enforcement and pledged to tackle the “stain” of “institutional racism.

“These are things that have been brewing in this country for four hundred years,” he said, adding that it was fortuitous that a passerby had filmed the incident on their phone.

In a statement on the death of Mr Floyd, former US president Barack Obama said while it was natural for many people to want to get back to “normal” after the coronavirus pandemic, “we have to remember that for millions of Americans, being treated differently on account of race, [is] tragically, painfully, maddeningly “normal.”

“It falls on all of us, regardless of our race or station, to work together to create a ‘new normal’ in which the legacy of bigotry and unequal treatment no longer infects our institutions or our hearts.”

US president Donald Trump declined to publicly address the matter at a press conference in the White House Rose Garden on Friday. But he subsequently confirmed that he had spoken to Mr Floyd’s family.

Earlier, the president became embroiled in an escalating row with Twitter after the social media platform accused the president of “glorifying violence.” It follows a tweet by Mr Trump in the early hours of Friday morning about the riots in Minneapolis which included the words “when the looting starts, the shooting starts.”

Twitter’s action against its most high-profile user marked the second time the social media giant has labelled Mr Trump’s tweets in recent days.

On Thursday Mr Trump signed an executive order outlining a review of a key piece of legislation that provides legal protections to internet companies for content posted on their platforms.