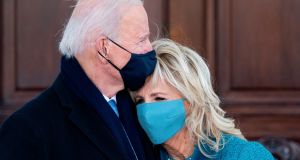 Joe and Jill Biden met in 1975 and married in 1977. Photograph: Alex Brandon/AFP via Getty Images

When President Joe Biden took the oath of office at the US Capitol this week, at his side was his wife of 43 years. That the United States still has an official “first lady” title seems anachronistic, though the arrival of Kamala Harris’s husband Doug Emhoff as the country’s first “second gentleman” shows that the system can move with the times.

The new first lady shows no signs of letting her new role define her. An academic with a doctorate in education, Jill Biden will continue to teach at Northern Virginia Community College, where she has worked for 12 years including her eight years as second lady when her husband was vice-president.

She will also carry out her public-facing duties as her husband begins his presidency; on Wednesday, just a few hours after she arrived at the White House, she held a virtual event honouring teachers. On Friday, she visited a healthcare centre in Washington DC.

The story of Joe and Jill Biden begins in 1975 when Jill was introduced to the young senator who had lost his first wife and infant daughter in a car crash a few years earlier. They married in 1977 and Jill helped raise her husband’s two young sons, Beau and Hunter, who had survived the crash. In 1981 their daughter Ashley was born.

Originally from Philadelphia, she worked closely with Michelle Obama during the Obama presidency, focusing on initiatives on military families, and meeting US troops across the world during her husband’s time as vice-president.

While she has written about her ambivalence towards her husband’s political career at points in their life – she discouraged him from running for president in 2004 – she has embraced the political world with gusto. She made headlines last year when she tackled a group of vegan protesters who stormed the campaign stage where Joe Biden was speaking.

In a split-second move, she put herself in front of the soon-to-be presidential candidate, grabbing a lunging protester by the wrists and successfully blocking her from getting to her husband. The previous month she also helped push away a heckler at a New Hampshire event. “I’m a good Philly girl,” she remarked with a steely smile, after the incident.

More recently, the wife of the president was embroiled in a different kind of controversy. Last month, Wall Street Journal columnist Joseph Epstein opined that the new first lady should drop her “Dr” title. “Jill Biden should think about dropping the honorific, which feels fraudulent, even comic,” he wrote.

“A wise man once said that no one should call himself ‘Dr’ unless he has delivered a child,” he added. His remarks sparked an immediate backlash, and Epstein was accused of sexism. On Twitter, women across the world with PhDs added “Dr” to their Twitter titles, sharing stories of their own doctoral achievements.

Asked about the controversy in an interview with television host Stephen Colbert, Jill Biden’s response was polite. “That was such a surprise,” she said, adding: “It was really the tone of it . . . he called me ‘kiddo’.” But she added: “One of the things I’m most proud of is my doctorate. I’ve worked so hard for it.”

In the same joint interview, Joe Biden recalled that he had had the honour of presenting his wife with her doctorate on stage at the University of Delaware. Colbert asked humorously if he had wanted to give Epstein and other naysayers a more robust rejoinder. “That close,” replied Biden with a smile gesturing an inch with his finger, before indulging in an unfortunate trope that still exists among Irish-Americans equating Irishness with fiery anger. “I’ve been suppressing my Irishness for a long time,” he said.

While the controversy has died down, the new first family has made no secret of its views on the suitability of the first lady’s honorific. As the incoming president and his wife were formally announced as they stepped on to the Capitol Hill balcony on Wednesday, the introduction was declared loud and clear.

“Ladies and gentlemen, the president-elect of the United States Joseph Robinette Biden junior and Dr Jill Biden,” boomed the announcer, to an eruption of applause.