Crisis consumes Chile ahead of vote on replacing constitution 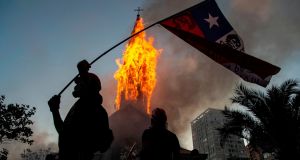 Demonstrations on the first anniversary of the social uprising in Chile, in Santiago, as the country prepares for a landmark referendum. Photograph: Martin Bernetti/ AFP via Getty

If voters in Chile needed a reminder of the stakes in the country’s referendum this Sunday, last weekend provided it.

Tens of thousands of people took to the streets across the Andean nation to mark the first anniversary of mass protests that shook one of Latin America’s most successful societies to its core.

In an echo of last year’s unrest, which left more than 30 people dead, thousands injured and parts of the capital Santiago burnt out, last weekend’s protests ended in disturbances, with two churches fire-bombed and hundreds of people arrested after clashes with police.

Even as the country has had to grapple with one of the highest mortality rates in the coronavirus pandemic since the unrest started, the political crisis still consumes much of its attention.

Most of those marching were calling for a Yes vote in Sunday’s referendum on whether to replace the country’s constitution.

The plebiscite, originally scheduled for April but postponed because of the pandemic, was a concession made last December by a frightened political class seeking to calm a popular uprising that had been ignited by a modest rise in fares on public transport.

Fuelled by police violence, public anger at the fare hike quickly grew into a broader anti-establishment movement that came to focus on the 1980 charter imposed on the country by former dictator Augusto Pinochet.

On Sunday, voters will decide if they want to rip this up and write a new one. They will also be asked how to go about drawing up a new document if they do vote for one, with a choice between a directly elected convention or a mixed one chosen by voters and congress. A new referendum produced by a convention would finally have to be put to voters for approval.

Polls indicate the Yes side will prevail, likely setting up months of political uncertainty as the country struggles to contain the coronavirus pandemic and rebound from the sharp economic downturn it has caused.

For many observers in the region, the unrest in Chile came as a shock.

The country was long seen as a rare Latin American success story ever since Pinochet was ushered out of power and democracy was restored in 1990. Sound economic growth means it has the highest per capita GDP in South America, fully double the Latin American average. And good governance has meant steady social progress. According to the United Nations, Chile tops the highest human development ranking in the region.

There was much celebration when, in 2010, Chile became the first South American nation to join the so-called rich nations club of the Organisation for Economic Co-operation and Development (OECD).

Yet it was the group’s most unequal member until Colombia joined earlier this year and is less equal than its immediate neighbours Peru, Bolivia and Argentina.

Advocates of a Yes vote on Sunday blame Pinochet’s constitution for safeguarding these structural inequalities, especially in the education and healthcare systems. Its requirement for super-majorities to pass any major reforms is also blamed for alienating many voters from a gridlocked political system seen as unable to respond to society’s demands.

In agreeing to the referendum, president Sebastián Piñera has expressed the hope the country will find a peaceful path for resolving the tensions laid bare by last year’s protests. But his right-wing coalition, elements of which still defend the legacy of the Pinochet dictatorship, is split on the issue. Given the current constitution’s genesis in a murderous and corrupt right-wing dictatorship, it is no surprise that the left in contrast is calling for a Yes vote on whether to draw up a replacement.

But some of its leaders have expressed caution about how much the process can achieve. “There could be great expectations that a constitution can resolve many questions but it is not like that,” warned former president Ricardo Lagos.

The 1980 constitution has already been amended more than 100 times and it was during Lagos’s presidency that the last major remnants of its authoritarian features were removed, along with Pinochet’s signature.

Some analysts have warned that, in binning the current document, Chile’s political class will see a convenient cover for its own failings removed. Latin America has a history of constitutional turbulence, with most countries in the region having implemented multiple documents since independence from Spain two centuries ago. Few of these changes have led to dramatic or lasting improvements.