US election guide: what to watch out for and when 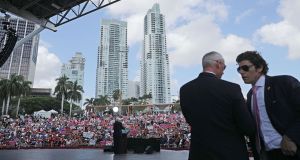 Voters go to the polls on Tuesday to elect a successor to Barack Obama as president of the United States. Here’s what to watch out for as results are declared in the early hours of Wednesday.

For everyone else, 110,000 polling stations will open on Tuesday morning across the United States and will begin to close from 6pm eastern time (11pm in Ireland), with most of Indiana and eastern Kentucky.

Winning the popular vote will not necessarily secure the White House for either Hillary Clinton or Donald Trump. Under the electoral college system, which distributes 538 “electors” in proportion to each state’s population, the winner is the candidate who can reach a majority (270) of electoral votes. The six states with the most electors are California (55), Texas (38), New York (29), Florida (29), Illinois (20) and Pennsylvania (20). The seven smallest states by population – Alaska, Delaware, Montana, North Dakota, South Dakota, Vermont and Wyoming – have three votes each.

There may be 50 states, but most of them consistently back one party. Southern states such as Alabama and Mississippi are considered guaranteed Republican wins, while California and Massachusetts are safely Democratic. That means the election will be won and lost in 10 competitive swing states: Florida, North Carolina, Ohio, Pennsylvania, Nevada, New Hampshire, Arizona, Virginia, Colorado and Michigan.

As voting gets under way, strategists and analysts will be watching for early signs of turnout in these key states. How long are the queues in white, blue-collar districts in Ohio, where Trump must perform strongly if he is to win? Are Latino voters turning out in sufficiently big numbers in central Florida to push Clinton over the line?

Throughout the day, field workers across the country will interview voters as they emerge from polling stations. By the close of voting, about 85,000 in-person voters and 16,000 early and absentee voters will have answered detailed questions about their vote, the reasons for their decision and their views about key issues in the campaign. Commissioned by a consortium comprising ABC, CBS, NBC, CNN, Fox and The Associated Press, the exit poll results will begin to filter into the live TV coverage from 11pm Irish time. It will help to answer some of the questions on which the election will turn. How did college-educated Republican women in Colorado vote? Has the Clinton campaign succeeded in mobilising African-American voters in sufficient numbers in North Carolina? Have the Mormons of Utah turned their back on Donald Trump and opted instead for the little-known former CIA agent Evan McMullin? The TV networks will draw on these insights – the most comprehensive picture of voter attitudes on election day – for their own projections, but they will wait until later in the night, when polling stations in more westerly states close and clearer patterns emerge, to call the election.

At 7pm eastern time (midnight in Ireland), polling stations will close in the first six states: Georgia, Indiana, Kentucky, South Carolina, Vermont and Virginia. There are two contests worth watching here. In Virginia, a strong showing from Clinton would reassure pollsters, who have consistently put this swing state in the blue column, and settle nerves in the Democratic camp. Conversely, a narrow winning margin or a victory for Trump would give a big boost to the property magnate. Georgia, a traditional Republican stronghold that last voted for a Democrat in 1992, has grown more diverse since Mitt Romney won there in 2012 and is considered one of Clinton’s outside bets. If she wins it, it probably means she is in for a very good night.

At the same time, first polls will close in Florida, whose 29 electoral votes make it the biggest and most valuable battleground. Polls have shown the two candidates neck-and-neck, with Clinton performing strongly in the ethnically-diverse south, Trump scoring strongly in the conservative north and a fierce battle being waged in the swing counties that run in a line from Tampa to Orlando in the centre. If the race is tight, however, don’t expect a result from Florida for at least another few hours.

By now, the crowds will have gathered for the candidates’ election night parties within a few miles of each other in Manhattan. Clinton has chosen the Jacob K Javits Convention Center, a vast complex with – guess what? – a glass ceiling, while Trump is hosting a more low-key invite-only event at a midtown hotel.

At 7.30pm (12.30am in Ireland), the TV networks will declare results from two key battlegrounds: North Carolina and Ohio. Barack Obama won North Carolina in 2008 but lost it to Romney in 2012, and Trump needs the state’s 15 electoral votes to keep open his most likely route to the White House. Although traditionally conservative, North Carolina’s large non-white population (about 29 per cent of the state) and significant numbers of white college graduates around the major cities will favour Clinton, but with early voting turnout among African-Americans down on 2012, this will be an important test of Clinton’s get-out-the-vote operation.

No Republican has won the White House without Ohio, and the midwestern state has swung for every successful candidate since 1964. The Rust Belt state’s large population of blue-collar whites in the east and the Appalachian southeast may help Trump, who has had the edge over Clinton here in eve-of-election opinion polls. Clinton’s hopes largely rest on the Democratic strongholds around Cleveland and Columbus, but she would also stand to benefit if moderate Republicans in the suburbs, turned off by Trump’s campaign, decided to stay away or vote against him.

1AM: A FLURRY OF DECLARATIONS

By 8pm in New York (1am in Ireland) the declarations will be coming thick and fast. Most are safe Democratic or Republican states, but look out for the hard-fought battleground state of Pennsylvania, where both candidates have campaigned heavily in recent weeks. Clinton has been ahead in the polls and performs strongly in the cities of Pittsburgh and Philadelphia, but Trump’s protectionist message has resonated in many of the state’s declining coal-mining and steel-milling towns. A Trump victory – the first by a Republican since 1988 – could be very costly for Clinton.

Around now, news will begin to emerge from New Hampshire, a relatively small prize (four electoral votes) but one the Democrats see as an important insurance policy against possible Trump wins in states such as Nevada and Iowa.

2AM: THE MIDWEST ‘FIREWALL’

Clinton has banked on a “firewall” of blue-leaning Midwestern states. Voting in three vital ones – Michigan, Minnesota and Wisconsin – will end at 9pm New York time (2am in Ireland). Trump has been pushing for a breakthrough in all three in recent days, probing for vulnerabilities in Clinton’s strategy by appealing to white working-class voters who could deliver him a surprise victory. If he succeeds the race could be very tight, but a clean sweep for Clinton would keep her on course for victory. At this point we will also find out whether Trump’s late push to keep Colorado in play has paid dividends, while Clinton’s electoral college vote will shoot up thanks to a win in New York.

Between 2am and 3am, the networks will probably call two big southwestern states: Texas and Arizona. Anything but a comfortable Trump victory in Texas would be a big upset, although Democrats will be watching closely for signs that a strong Hispanic vote could push the state into battleground status in 2020. In Arizona, which has not voted for a Democrat since 1996, Clinton has been running close behind Trump and even overtook him in some polls in late October. Trump must hold on to it to stay in the race.

3AM: NEWS FROM THE DESERT

High turnout among Hispanics in early voting in Nevada was encouraging news for the Clinton camp, suggesting she may have built up a considerable lead on the back of her performance in the Las Vegas area. At about 10pm New York time (3am in Ireland), we will learn whether Trump has managed to counteract that by mobilising his voters in rural counties and in the Reno area.

Any suspense about the outcome in neighbouring Utah would set off alarm bells in the Trump campaign. The Republican nominee is unpopular among Mormons, many of whom have shifted allegiance to the independent Evan McMullin. His success has been one of the most intriguing subplots of the campaign. If he wins, Trump is in trouble.

Meanwhile, a result will likely be declared around now in Iowa, the swing state where Trump has performed best in the polls.

The five states that close at 11pm New York time (4am in Ireland) – California, Hawaii, Idaho, Oregon and Washington – are all reliably Democratic or Republican. But the casting of the final votes in these states is typically the moment when the TV networks officially call the election. In 2012, NBC called it for Obama at 11.12pm. Within six minutes its competitors had all done the same. And an hour later, Mitt Romney was giving his concession speech.

Unless the race is exceptionally tight or no candidate has reached 270 electoral votes – which would leave it to the Republican-controlled House of Representatives to decide who the next president should be – celebrations will by now be well under way at the victor’s party in New York.