US president Donald Trump wishes Ghislaine Maxwell, the British socialite and ex-girlfriend of convicted sex offender Jeffrey Epstein, “well” as she awaits trial in a high-profile case in the US. Video: Reuters 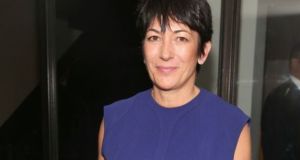 US president Donald Trump has wished Ghislaine Maxwell (pictured), the British socialite and ex-girlfriend of Jeffrey Epstein, ‘well’ as she awaits trial in a high-profile case in the US. Photograph: Sylvain Gaboury/Patrick McMullan via Getty.

US president Donald Trump has wished Ghislaine Maxwell, the British socialite and ex-girlfriend of convicted sex offender Jeffrey Epstein, “well” as she awaits trial in a high-profile case in the US.

Mr Trump was speaking at a White House press conference where he was asked by a journalist if Ms Maxwell will “turn in powerful people” including the Duke of York Prince Andrew.

He added: “I don’t know the situation with Prince Andrew. I just don’t know. I am not aware of it.”

Ms Maxwell was told by a New York judge last week when she appeared at a court via videolink that she will remain in custody while awaiting trial on charges of trafficking minors for Epstein. She has pleaded not guilty and will go on trial in July of next year.

Prince Andrew stepped down from public royal life in November last year after a disastrous Newsnight interview in which he failed to show remorse over his friendship with Epstein, who took his own life while in prison.

One of Epstein’s victims, Virginia Giuffre, who claims she was trafficked by the financier, alleges that Andrew had sex with her on three separate occasions, including when she was 17, still a minor under US law.

The royal, who categorically denies any wrongdoing, has been urged to come forward and be interviewed by US prosecutors.

These calls were renewed after his friend Ms Maxwell appeared in court accused of facilitating Epstein’s sexual exploitation of underage girls. The prince’s legal team has stressed he has made three offers to help with investigations.

Meanwhile, a lawyer for Ms Maxwell on Tuesday asked a judge presiding over her case to impose a gag order on lawyers and others to reduce prejudicial pre-trial publicity and protect her chances of a fair trial, The Associated Press reported.

He said the comments showed an order was necessary to prevent “prejudicial pre-trial publicity by the government, its agents, and lawyers for alleged witnesses.”

In particular, he cited comments at a news conference by William Sweeney, head of New York’s FBI office, that referenced Ms Maxwell as “one of the villains in this investigation” and compared her to a snake that “slithered away to a gorgeous property in New Hampshire.”

Prosecutors declined through a spokesperson to comment on the gag order request. - AP