Gibraltar releases Iranian tanker in defiance of US

Move despite late bid by US to seize the vessel, which is at centre of Iran-UK stand-off 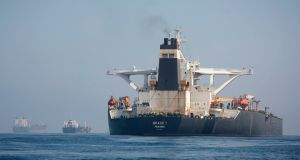 The Grace 1 supertanker at anchor in the British territory of Gibraltar on Thursday. Photograph: Marcos Moreno/AP

Gibraltar has released an Iranian tanker at the centre of a dispute between Britain and the Islamic republic after a court set aside a last-minute US legal bid to seize the vessel.

The decision will ease tensions between London and Tehran that have been running high since British commandos and Gibraltar police seized the Grace 1 in July, alleging it was transporting Iranian crude to Syria in violation of EU sanctions.

Fabian Picardo, Gibraltar’s chief minister, said on Thursday that in “light of the assurances” Gibraltar had received from Iran that the Grace 1 would not violate EU sanctions “there are no longer any reasonable grounds for the continued legal detention” of the tanker.

A hearing at Gibraltar’s supreme court had been due to decide on Thursday on whether the Grace 1 should be released. But the process was complicated by a last-ditch application by the US Department of Justice to seize the ship.

Iran continues to hold a UK-flagged vessel, the Stena Impero, which its Revolutionary Guards seized in the Strait of Hormuz two weeks after the detention of the Grace 1 in apparent retaliation.

The tit-for-tat ship seizures came as the Trump administration maintains a “maximum pressure” campaign against Iran, aiming to force the Islamic republic to the negotiating table after the US abandoned a landmark nuclear deal with it last year.

Some Iranian officials have hinted that the Stena Impero would be released once the Grace 1 was freed, but British officials had ruled out any barter over the ships.

A spokesman for the UK’s Foreign Office said: “There is no comparison or linkage between Iran’s unacceptable and illegal seizure of, and attacks on, commercial shipping vessels in the Strait of Hormuz and the enforcement of EU Syria sanctions by the government of Gibraltar.”

A senior US official said Washington’s last-ditch legal attempt to seize the Grace 1 was an attempt to deny “the Iranian regime the revenues it uses to fuel its militant proxies in the region”. The justice department declined to comment.

Mr Picardo said the US request had come overnight on Wednesday night and was not based on the EU sanctions on Syria. He said that Gibraltar had decided to release the supertanker because it had received written assurances on August 13 that it was not now headed for Syria.

“Whatever geopolitical pressure might have been applied, the law is the law and there is no way round it,” Mr Picardo said. But he denied that Gibraltar was defying the US, arguing that the territory gave “respectful consideration” to the legal requests from both Tehran and Washington. “There was no absolutely no defiance of the US whatsoever.”

He added that it would be up to law officers in Gibraltar’s justice ministry to assess the US request to detain the tanker. But he acknowledged that the Grace 1 was now free to leave the area although it remained under Gibraltar’s jurisdiction while it was in its waters.

Mohammad Javad Zarif, Iran’s foreign minister, tweeted: “Having failed to accomplish its objectives through its #EconomicTerrorism – including depriving cancer patients of medicine – the US attempted to abuse the legal system to steal our property on the high seas. This piracy attempt is indicative of Trump admin’s contempt for the law.”

Jon Alterman, a Middle East expert at the Center for Strategic and International Studies, said: “This episode strikes me as emblematic of the operating style of the Trump administration: there’s no harm in trying. For 75 years, US administrations were cautious about taking on long-shot efforts. The Trump administration is proudly unpredictable, entrepreneurial, and experimental.”

Jeremy Shapiro, research director at the European Council on Foreign Relations, said the US had sensed in the tanker dispute an “opening to drive a wedge between Iran and the Europeans”.

The UK has worked with France and Germany to save the 2015 nuclear deal but the tanker impasse has created friction between Britain and Iran.

Tehran has interpreted the seizure of the Grace 1 as a sign the UK was aligning itself more closely with the Trump administration.

The UK has insisted its decision to detain the Grace 1 was in no way related to the US measures and based solely on the belief that the vessel was violating sanctions.

Mr Picardo said a change in the Grace 1’s destination meant Gibraltar had already “deprived the Assad regime in Syria of more than [$140 million] of valuable crude oil”. But he did not say where the vessel would go. Iran has denied the vessel was carrying oil to Syria.

Tehran said it detained the Stena Impero because it violated international maritime regulations by causing pollution, switching off tracking devices to avoid Iranian forces, and colliding with a fishing boat. The UK has accused Iran of acting unlawfully.

Since Boris Johnson became the UK’s new prime minister, London has said it would join a US-led initiative to protect maritime shipping in the Gulf. Germany and France have declined to join the effort.

Washington has imposed crippling economic sanctions on Iran since US president Donald Trump last year unilaterally withdrew the US from the 2015 nuclear deal Tehran signed with world powers.

Gibraltar’s supreme court last month granted authorities in the British overseas territory the power to detain the Grace 1 for 30 days, which expires on Saturday. – Copyright The Financial Times Limited 2019