Irish-American relations at crossroads as Varadkar goes to Washington 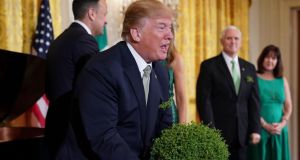 US president Donald Trump picks up a bowl of shamrocks in the White House on St Patrick’s Day last year as Taoiseach Leo Varadkar and US vice-president Mike Pence look on. Photograph: Mandel Ngan/AFP/Getty Images

Next week, Taoiseach Leo Varadkar will present a bowl of shamrock to US president Donald Trump in the White House, continuing a tradition that stretches back to the 1950s when the then Irish ambassador sent Harry Truman a box of shamrock.

The St Patrick’s Day celebrations in the US have grown significantly since. Each year, they prompt debate in Ireland over the wisdom and value of sending the Taoiseach and other Cabinet Ministers overseas at taxpayers’ expense.

Standing with Trump, Varadkar will smile and pose for photographs, no doubt explaining to those who do not favour the Republican president that the Irish-American relationship transcends individuals and friendly nations can differ on specific issues.

For those at the coalface of Irish-American relations in Washington, the value of the White House event cannot be underestimated. “It’s extremely important,” says Dan Mulhall, Ireland’s Ambassador to the US.

Everyone accepts that the future of the Irish diaspora in the US is facing serious challenges, mainly due to the dramatic decline in Irish emigration there in recent decades

“No other country in the world has this annual engagement with the US president, the vice-president and the speaker of the House. It’s a vital opportunity for Ireland to ensure that our concerns are understood in Washington.

“It’s an exceptional privilege, and one that we should never take for granted,” says Mulhall, who will be one of those in the Oval Office for Thursday’s meeting between Varadkar and Trump.

Mulhall recently met Trump and his wife Melania at the president’s Mar-a-Lago estate in Palm Beach, Florida, “I had a very congenial conversation with the president and the first lady, and I was happy to have the opportunity to do so, particularly ahead of the St Patrick’s Day celebrations,” says Mulhall, who had been invited to the club by a member.

Everyone accepts that the future of the Irish diaspora in the US is facing serious challenges, mainly due to the dramatic decline in Irish emigration there in recent decades.

Niall O’Dowd, founder of irishcentral.com and commentator on Irish-American affairs, says we are seeing the end of mass Irish migration to the US, almost 175 years after the Famine.

“At one point, the Irish were pouring in at the rate of 20,000 a month; now a few thousand a year come legally,” he says. “Legal emigration [from Ireland] in any significant numbers is over.”

Pointing out that there will no longer be a generation of Americans brought up in homes where there was first-hand experience of Ireland, he says the Irish Government needs to address the challenge of sustaining the connection with future generations: “A diaspora can die.”

'There is no Irish vote. If there ever was such a thing, it hasn’t existed at the national level for decades'

But the annual visit to Washington by the Taoiseach has prompted questions as to whether the ritual has passed its sell-by date.

In a book published this week, Trina Vargo, who is the head of the US-Ireland Alliance which runs the Mitchell Scholarship programme that sends 12 US students to Ireland each year, offers a damning critique of Irish America.

Describing what she calls a “begging bowl” mentality, she argues that pleas for special immigration deals and funding for developments are no longer valid as Ireland becomes more wealthy and the political influence of Irish America diminishes.

Vargo, who has long clashed with many figures in the Irish-American community, argues that the number of Americans who “tick the box” on the US census form for Ireland has fallen dramatically in recent years. “There is no Irish vote. If there ever was such a thing, it hasn’t existed at the national level for decades,” she says.

One of the biggest shifts in thinking about Irish America is a move away from a focus on the undocumented and, instead, on encouraging Irish people to move to the US

The focus must turn to the younger generation of Irish Americans, says former Irish diplomat Ted Smyth of the UCD Clinton Institute, citing 2017 research that shows 37 per cent of Irish Americans aged 45 and under have never been to Ireland.

“How do we engage fourth-, fifth- and sixth-generation Irish Americans? Research shows that bringing people to the country for a meaningful experience when they’re young helps to solidify contacts, so that is something that needs to be explored.”

One of the biggest shifts in thinking about Irish America is a move away from a focus on the undocumented and, instead, on encouraging Irish people to move to the US.

The Government’s special envoy to the US, Waterford TD John Deasy, ruffled feathers in Irish-American communities when he was appointed in 2017. He commissioned research which suggested the real number of undocumented Irish in the US was 10,000 – far lower than the figure of 50,000 that is usually cited.

Some argue the problem of undocumented is now moot. “Essentially the issue is sorting itself out. Many undocumented have moved back to Ireland, others are content to stay put without the proper paperwork,” one senior source in the Irish-American community admits privately.

The Irish immigration debate is changing, moving away from a focus on the undocumented and, instead, seeking ways to secure visa options for new flows of Irish people who want to emigrate legally.

Central to these efforts was last year’s attempt to secure E3 two-year renewable visas for Irish people – an option currently enjoyed only by Australians. Deasy led the campaign, pointing out that Australia takes up about half of its 10,500 annual allocation.

Trump has frequently supported legal immigration for the 'highly qualified', though many suspect his preference falls around ethnic and cultural lines

Campaigners argued the rest should go to Ireland, requiring no overall increase in the number of Congress-approved visas. The Bill passed the House of Representatives but was blocked in the Senate by Arizona immigration hardliner Tom Cotton.

The last-minute defeat was a blow to Deasy, the Irish Embassy and others such as Chicago-based senator Billy Lawless. However, the E3 visas will be back on the table when Varadkar meets Trump.

The White House was strongly supportive of the deal, thanks in part to Mick Mulvaney, now Trump’s acting chief of staff, who is a regular golfing visitor to Ireland.

Trump himself signalled support last year. Despite his immigration views, Trump has frequently supported legal immigration for the “highly qualified”, though many suspect his preference falls around ethnic and cultural lines.

Trade and investment will also feature highly during Thursday’s talks. Ireland continues to run a huge trade surplus in goods with the US each year, a trend that caught the eye of the commerce department and the White House early in Trump’s presidency.

Luckily for Ireland, that issue appears to have fallen off the Trump agenda since, as trade negotiators have focused on China, which accounts for half of America’s $621 billion trade deficit.

Brendan Boyle told the House of Representatives a hard border in Ireland would threaten the Belfast agreement, 'one of the great foreign policy achievements of the 20th century'

However, one Washington-based economist this week warned that the Trump-created US-EU trade conflict could refocus attention on the US’s trade imbalances with Ireland.

Some €57 billion worth of goods were exported from Ireland to the US last year, with little more than $10 billion coming in the other direction – though much of the Irish trade hails from US firms based in Ireland.

Ireland’s attitudes to the Middle East are under scrutiny, too. A Bill currently before the Oireachtas which seeks to ban the purchase of goods from Palestinian occupied territories has led to warnings to Varadkar from 10 members of Congress.

Brexit and Northern Ireland will feature highly, too. Last year, the Belfast Agreement’s 20th anniversary focused minds in Washington on the fragility of peace, but the deepening Brexit crisis has heightened concerns.

In January, Congressman Brendan Boyle told the House of Representatives the reintroduction of a hard border in Ireland would threaten the agreement, “one of the great foreign policy achievements of the 20th century”.

Concern has intensified on Capitol Hill, particularly among the powerful Friends of Ireland caucus led by Republican Peter King and Democrat Richard Neal, a long-term observer of Irish and Northern Irish affairs.

Neal is a hugely significant figure following his election as chair of the powerful Ways and Means committee after Democrats won control of the House of Representatives in the midterm elections. Crucially, that committee will have final sign-off on any future trade deal between the US and Britain after Brexit.

Last month, Neal told Tánaiste Simon Coveney during his visit to Washington that concerns about the Belfast Agreement would “weigh on his mind” as his committee considers any US-UK trade deal.

King went even further: “If the British want to consider any type of trade agreement with the United States it is important that the soft border is maintained,” he said. “What influence we have, we will use it, in the Friends of Ireland.”

The renewed interest in Brexit has unnerved British officials in Washington, with some recalling the power of the Irish-American lobby during the 1990s peace process negotiations and the controversy over granting a visa to Sinn Féin’s Gerry Adams.

Significantly, senior British diplomats met Neal in his Capitol Hill office days after Coveney’s visit to set out their perspective.

The power of the "special relationship" and Britain’s diplomatic clout cannot be underestimated, particularly given Britain’s status as a major military ally of the US.

Peace since the 1998 deal 'cannot mask the continued commitment of the Irish to the ultimate reunification of Ireland, here in America as well as there'

Additionally, the executive branch still has significant power over trade deals. The Trump administration has said it supports a post-Brexit trade deal with the UK. Preliminary talks have already begun.

Irish-America’s growing interest in Brexit and its ramifications for Ireland has reignited hopes for a united Ireland in some corners, as illustrated in a New York Times letter this week from Brian O’Dwyer, this year’s New York St Patrick’s Day grand marshall,

O’Dwyer wrote that the 20 years of peace since the 1998 deal “cannot mask the continued commitment of the Irish to the ultimate reunification of Ireland, here in America as well as there”.

Brexit’s impact on Ireland and the US-Irish economic relationship will be discussed on Friday at a New York conference addressed by Richard Neal, Minister for Justice Charlie Flanagan and Senator George Mitchell among others.

Flanagan is one of a squad of Irish Ministers in the US next week, spreading the Irish word and highlighting the role Ireland can play as a gateway into Europe after Brexit.

Minister of Health Simon Harris will visit the west coast, including the cities of Los Angeles and San Francisco; Minister of State David Stanton goes to Savannah and Atlanta in Georgia; and Minister of State Mary Mitchell O’Connor visits Austin, Denver and Kansas.