Trump will run for presidency again if he loses, says former chief of staff

US news network CNBC has cut away from an address by Donald Trump to fact-check the American president's claims of fraud in the US presidential election. Video: CNBC 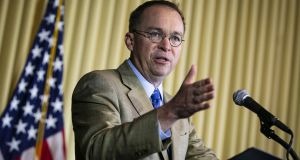 Donald Trump would “absolutely” run for the US presidency again if he loses this election to Joe Biden, the president’s special envoy for Northern Ireland Mick Mulvaney has said.

Mr Mulvaney, who served as Mr Trump’s White House chief of staff before taking up his current role, said the US president did not like losing and he would be younger than Mr Biden is now if he decided to run in 2024.

“I would absolutely expect the president to stay involved in politics and would absolutely put him on the shortlist of people who are likely to run in 2024,” he said on a webinar hosted by the Dublin think tank, the Institute for International and European Affairs.

The former Republican congressman described Mr Trump as a “very high-energy 74-year-old” who he expects to be “further engaged in 2024 or 2028 if he were to lose this next election”.

Mr Mulvaney rejected suggestions that Mr Trump’s decision to take legal actions over voting in the election were a threat to the democratic process.

He said that “lawsuits were part of close elections” and that “everyone was lawyering up”, including the Biden campaign team.

He dismissed as “crazy” a suggestion that Mr Trump was “mounting a coup” by claiming that he believed he won the vote in his election night speech.

Mr Mulvaney said that there would be “a peaceful transition or retention of power” on inauguration day on January 20th.

“Could things get really sloppy and messy and slow between now and then? Absolutely. They were, by the way in 2000 as well, yet we managed to work through it,” he said, referring to the contested George W Bush-Al Gore election.

“American elections can be a sloppy, ugly thing but it’s sort of like making law which we describe as making sausage: no one wants to see it happen but you enjoy the end product.”