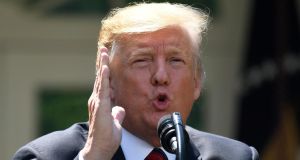 President Donald Trump speaks on immigration in the Rose Garden at the White House in Washington, on Thursday. Photograph: Susan Walsh/AP

US President Donald Trump unveiled a new immigration policy aimed at attracting skilled workers to the United States, but there were early signs that it was unlikely to gain support in Congress.

At a ceremony in the White House Rose Garden on Thursday, Mr Trump unveiled the new plan which aims to introduce a merit-based system rather than prioritise immigrants with family members already in the country.

He also said that immigrants entering the US must be financially self-sufficient, will be required to learn English and also pass a civics exam prior to admission. While there would be no change to the number of green cards allocated each year, most of these would now be awarded on the basis of skills. Also included in the proposal is funding provision for border security measures including construction of Mr Trump’s border wall.

In a speech that marked a change in emphasis by the president who swept to power in part by advocating a tough immigration policy, Mr Trump highlighted America’s development as a nation of immigrants.

Pledging to make the US immigration system “the pride of our nation and the envy of the world”, he said the new proposal would be “pro-American”.

We are here on this beautiful spring day to unveil our plan to create a fair, modern & LAWFUL system of immigration for the U.S. If adopted, our plan will transform America’s immigration system into the pride of our Nation and the envy of the modern world. https://t.co/YqyTYgTByD

“Democrats are proposing open borders, lower wages and, frankly, lawless chaos. We are proposing an immigration plan that puts the jobs, wages and safety of American workers first,” he said. “Our proposal is pro-American, pro-immigrant and pro-worker. It’s just common sense.”

The plan was devised for the most part by Mr Trump’s son-in-law and senior adviser Jared Kushner, who met with congressional leaders to discuss the proposal earlier in the week. White House adviser Stephen Miller, an immigration hardliner, was also involved in formulating the policy.

But even some of Mr Trump’s closest allies expressed scepticism about its workability. Senator Lindsey Graham, a Republican, said that the legislation would not pass Congress.

In particular, he said that the current asylum law needed to be addressed. Democrats for their part were unhappy that the proposal contains no provisions for “dreamers” – young people who were brought to the US as children.

Mr Trump revoked DACA – the deferred action for childhood arrivals proposal introduced by President Obama to protect those dreamers – in 2017, but the law has effectively remained in place while it is subject to various court challenges. Senate minority leader Chuck Schumer said the new Trump plan represented “the same partisan, radical anti-immigrant policies that the administration has pushed for two years”.

Previous attempts at comprehensive immigration reform have eluded previous presidents, in part over partisan divisions over what to do about the estimated 11 million undocumented immigrants living in the country.

Mr Trump departed Washington DC later on Thursday to attend a fundraiser in New York, one of his few visits back to his home city since he was elected president. Meanwhile, former president Jimmy Carter was released from hospital in Georgia having suffered a broken hip earlier this week. The 94-year-old is the oldest living former president.