US president set to use Doonbeg as base during European trip

Leo Varadkar has said that he's disagreed with US president Donald Trump on climate change, women's rights, the European Union and free trade but will welcome his visit to Ireland. 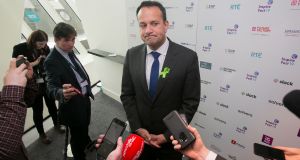 The President of the United States is welcome in Ireland but protest “is allowed and is welcome”, Taoiseach Leo Varadkar said on Thursday.

Mr Varadkar was asked about the upcoming visit of Donald Trump to Ireland in June as he attended an event in Dublin.

Asked what he would say to people planning protests for the visit, Mr Varadkar said: “I’d say to them, this is a democracy and peaceful protest is part of democracy. And I would certainly never criticise anyone for taking part in a protest if that’s the way they wish to express their views.”

Mr Trump will visit Ireland early next month coinciding with a state visit to the UK and France for a war commemoration, sources familiar with his plans said. Mr Trump is expected to use Doonbeg, his Co Clare golf resort, as a base from where he will attend the D-Day anniversary in Normandy.

In his first visit to Ireland as president, Mr Trump is expected to arrive on June 5th after his three-day state visit to the UK and to travel on to Normandy for the second World War commemoration on June 6th.

Under plans being worked on by US officials, Mr Trump may return to Doonbeg on June 7th before flying back to the US. It is not yet clear how many nights he might stay at the Co Clare hotel he bought five years ago.

Irish Government officials have been exploring the possibility of Mr Varadkar meeting Mr Trump at another hotel in Co Clare, Dromoland Castle, between June 5th and 7th, while the US president uses his own resort as a base for the second half of his three-country European visit.

Asked if people would be allowed protest near where Mr Varadkar would meet Mr Trump, Mr Varadkar said: “None of that’s been worked out and that’s clearly going to be a matter for the Garda, who will have to make those decisions based on security grounds.

“But you know, as has been the case always in the past, the President of the United States is welcome in Ireland. And I believe it’s important that we should respect the office even if people have particular views about the current incumbent.

“The links that exits between Ireland and America are very strong, they’re abut the economy and jobs, they’re about citizenship, they’re family links too and they’re cultural links. We want to keep those links strong, regardless who is Taoiseach or President,” he added.

Mr Varadkar said that Government Buildings did not have official confirmation yet of the visit. He said that the protocol was that the announcement would come form the White House.

He told reporters: “A lot of people have been very critical of President Trump, including me on occasion, on issues around climate for example, on his opposition to free trade , on the criticisms he’s made of the EU, on issues such as women’s rights. I’ll have the opportunity as I’ve had in the past to raise those issues with him in person, but I understand that but I understand that other people will wish to do so by means of protest, and in a democracy, protest is allowed and is welcome.”

Asked if there were any policy areas in which he agreed with President Trump, Mr Varadkar paused before saying, “I’m absolutely sure there are . . . it’s always the differences that spring to mind. But let me think about that.”