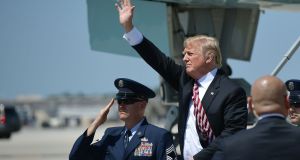 Donald Trump hit out at James Comey on Monday again following an explosive TV interview in which the former FBI director labelled the president “morally unfit” for office.

“Comey drafted the Crooked Hillary exoneration long before he talked to her (lied in Congress to Senator G), then based his decisions on her poll numbers,” Mr Trump wrote on Twitter. “Disgruntled, he, McCabe, and the others, committed many crimes!”

Mr Trump’s tweet came the morning after Mr Comey gave his first televised interview since he was unceremoniously fired last May while overseeing the FBI’s investigation into Russian interference in the US election. In a lengthy sit-down with ABC’s George Stephanopoulos to discuss his new book, A Higher Loyalty, Mr Comey offered his sharpest rebuke yet of Mr Trump’s presidency and labelled his former boss a “stain” on those who worked for him.

“A person who sees moral equivalence in Charlottesville, who talks about and treats women like they’re pieces of meat, who lies constantly about matters big and small and insists the American people believe it, that person’s not fit to be president of the United States, on moral grounds,” Mr Comey said.

He later added that Mr Trump may have committed obstruction of justice by repeatedly pressing him to drop his inquiry into former national security adviser Michael Flynn.

“There’s certainly some evidence of obstruction of justice,” Mr Comey said, adding that if Mr Trump were to fire special counsel Robert Mueller, it would “set off alarm bells that this is his most serious attack yet on the rule of law”.

Mr Trump was probably referring in his tweet to Mr Comey’s decision in July 2016 to clear Hillary Clinton of criminal wrongdoing in her use of a private email server as secretary of state. On Sunday, Mr Trump similarly suggested Mr Comey’s handling of the Clinton case seemed to be based on the assumption she would win.

Comey drafted the Crooked Hillary exoneration long before he talked to her (lied in Congress to Senator G), then based his decisions on her poll numbers. Disgruntled, he, McCabe, and the others, committed many crimes!

He also appeared to cite Mr Comey’s testimony before Congress last year, in which he told Senator Chuck Grassley, a Republican of Iowa, that he had never been an anonymous source to the press nor had he authorised someone else to do the same.

On Monday, as Mr Trump prepared to head off to Florida for a week, his senior counsellor, Kellyanne Conway, sought to undermine Mr Comey’s credibility by questioning his controversial decision to reopen the investigation into Hillary Clinton’s use of a private emails server 11 days before the November 2016 presidential election.

“This guy swung an election,” Ms Conway said on ABC’s Good Morning America, seeming to suggest that Mr Comey had contributed to Mr Trump’s victory – a theory unlikely to find favour with the president. “He thought the wrong person would win.”

She quickly rowed back on that in a tweet, writing: “He did not. He swung and miss [sic] cost her the election.”

“If I ever start considering whose political fortunes will be affected by a decision, we’re done,” Mr Comey said of his thinking at the time, referring to what he believed was the FBI’s responsibility to act as an independent law enforcement agency.

“We’re no longer that group in America that is apart from the partisans, and that can be trusted. We’re just another player in the tribal battle.”

Speaking to reporters on Air Force One, Ms Sanders said Mr Comey was “a self-admitted leaker”.

“I think that his credibility is really at hand, and it’s quite interesting that he would question someone else’s when he has such a lack of credibility himself,” Ms Sanders said.

Mr Trump has also repeatedly zeroed in on former deputy FBI director Andrew McCabe’s admission that he authorised an agent to speak anonymously to the press. Mr McCabe was fired last month, two days before he was due to retire. Mr Comey was fired by Mr Trump in May last year because of his investigation into “this Russia thing with Trump and Russia”.

There is no evidence Mr Comey or Mr McCabe committed any crimes.

The Trump administration, with the support of the Republican National Committee, has mounted a campaign to discredit Mr Comey amid the release of his book. – Guardian