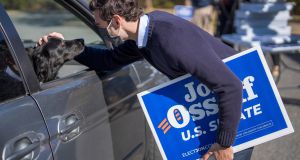 US president Donald Trump will travel to Georgia on Saturday for his first large-scale public event since losing the presidential election to Joe Biden last month.

Mr Trump is to campaign for Republican Senate candidates Kelly Loeffler and David Purdue, who are taking part in January 5th run-off elections after neither reached the 50 per cent threshold needed to win the November 3rd contests.

The president has billed the Saturday evening event in Valdosta, southern Georgia, as a “rally”. It is technically being hosted by the Republican National Committee, rather than the Trump campaign.

“Will be going to Georgia for a big Trump rally in support of our two great Republican senators,” the president tweeted. “They are fantastic people who love our country and love their state. We must work hard and be sure they win.”

Both Republican candidates have allied themselves with the president since the November 3rd election, accusing their own secretary of state Brad Raffensperger of mismanaging Georgia’s election and giving credence to the president’s unsubstantiated claims of voter fraud.

Joe Biden became the first Democrat in decades to win the state of Georgia in the presidential election, but Democrats face an uphill battle to win the two Senate seats, which would ensure Democratic control of the US Senate.

Former president Barack Obama hosted an online event with the two Democratic challengers for the seat, Jon Ossoff and the Reverend Raphael Warnock, on Friday, while vice-president Mike Pence campaigned in Georgia for Mr Perdue and Ms Loeffler.

Mr Pence was greeted by the candidates as he toured the headquarters of the Centres for Disease Control and Prevention (CDC) in Atlanta before heading to Savannah for a campaign event later in the day.

Mr Trump’s rally on Saturday takes place as his campaign announced that the president and connected entities have raised $208 million since election day – an unusually large sum.

The outgoing president’s campaign team is continuing to solicit contributions from supporters for the “Trump Make America Great Again Committee” in order to help fund challenges to the presidential election result.

“We cannot allow the Left to try to STEAL this election. Stand with us now!” its website states.

“These tremendous fundraising numbers show President Trump remains the leader and source of energy for the Republican Party, and that his supporters are dedicated to fighting for the rightful, legal outcome of the 2020 general election,” said Bill Stepien, Mr Trump’s 2020 campaign manager.

“It also positions President Trump to continue leading the fight to clean up our corrupt elections process in so many areas around the country, and to build on gains from the 2020 elections so we can take back the House and build on our Senate majority in 2022.”