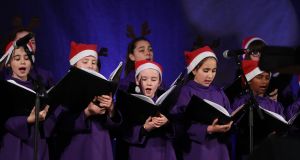 Carol singing will not be permitted and churches should consider holding additional services, with pre-booked spots over the Christmas period, under new public health guidance for religious services.

Due to the increased risk of Covid-19 transmission from people singing in proximity to others, the guidance stated carol singing will not be permitted at religious services.

Religious services were permitted to resume this week with limits of 50 people in attendance. Previously church services had been held via webcam during the national lockdown, with funerals permitted but limited to 25 people.

Guidance published on Friday by the Health Protection Surveillance Centre (HPSC) set out how “overcrowding” at mass or other religious services could be prevented over the Christmas period.

Recommendations included running additional services, increased stewarding of parishioners, and for churches to set up an “advance booking system where necessary” for places at services.

Mass should not exceed one hour, including the time it takes people to enter and exit the church, the guidance stated. There should be at least one hour between services to allow time to clean surfaces, and ventilate the church.

Social distancing of two metres should be in place between people seated along church pews, with those attending services required to wear face coverings.

“Performance and practice by choirs and musical ensembles has been associated with spread of Covid-19 due to the increased expulsion of droplets associated with singing and wind-blown musical instruments,” the guidance said.

“Congregational singing, choir singing and carol singing is not permitted, due to the increased risk of spreading virus to others present at the service. Playing musical instruments that are wind-blown should also be avoided,” it said.

Other music such as performances with string or percussion instruments would be possible, it said.

The priest or other religious leader would be required to wear a face covering during the service, unless delivering a sermon, and then only if they are more than two metres from other individuals.

The guidance also states physical interaction during mass, such as giving the sign of peace and shaking hands, should be avoided.

Entry and exit of the church should be staggered to allow for better physical distancing, and people should not be allowed to gather outside after the service.

In a statement, the Association of Catholic Priests said there was a fear that large numbers at masses on Christmas Eve and Christmas Day would create a “dangerous and unmanageable” prospect.

“It is an open secret that there is huge concern if not alarm in parishes regarding how the Christmas Eve and Christmas Day Masses can be organised,” it said.

Many priests were being placed under “undue and unfair pressure” to hold multiple masses, set up ticketing systems, or agree to “unrealistic and dangerously inappropriate measures to sanitise church buildings and to recruit unrealistic numbers of volunteers.”

As a result, some churches would only be offering mass online on Christmas Eve and Christmas Day via webcam services, it said.

To date there have been 18 Covid-19 outbreaks linked to religious ceremonies, with one recorded in the last week.