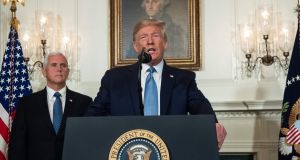 US president Donald Trump speaks about the mass shootings from the Diplomatic Reception Room of the White House in Washington, DC. Photograph: SAUL LOEB / AFP

In a live televised address from the White House, Mr Trump said that hate has “no place in America”.

His comments came as the death toll in the El Paso shooting rose to 22, after two people died from their injuries on Monday. In total, 31 people were killed in the twin shootings in Dayton and El Paso, which unfolded within 13 hours of each other.

“The First Lady and I join all Americans in praying and grieving for the victims, their families and the survivors,” Mr Trump said in the ten-minute address.

But he failed to suggest any specific measures to tackle gun legislation, instead focusing on the role played by mental health and computer crimes in gun crime. “Mental illness pulls the trigger not the gun,” he said, as he described the perpetrators of this weekend’s mass shootings as “wicked” and “mentally-ill monsters”.

He also laid much of the blame for gun violence on video games. “It is too easy today for troubled youth to surround themselves with a culture that celebrates violence,” he said, promising to address the danger of “gruesome and grisly video games”.

Mr Trump delivered the televised address from beneath a portrait of George Washington in the White House. At one point he mistakenly referred to the city of Toledo, another town in Ohio, as one of the sites of the mass shootings.

While Mr Trump for the first time acknowledged the problem of white supremacism in his pre-scripted address, his lack of specificity on ways to tackle America’s guns laws left many Americans disappointed.

Nonetheless, his comments presented a denunciation of racism and white nationalism. “In one voice, our nation must condemn bigotry, hatred and white supremacy,” he said. “These sinister ideologies must be defeated,” noting that the shooter in El Paso posted a manifesto online “consumed with racist hate”.

He also called on Congress to pass legislation to ensure that those who commit hate crimes face the death penalty, a proposal he returned to later on twitter.

“Today, I am also directing the Department of Justice to propose legislation ensuring that those who commit hate crimes and mass murders face the DEATH PENALTY – and that this capital punishment be delivered quickly, decisively, and without years of needless delay,” he tweeted.

But the president’s speech did not elaborate on a proposal he had floated earlier on twitter on background checks.

In an early morning tweet he suggested that Republicans and Democrats should come together to introduce stronger background checks, “perhaps marrying this legislation with desperately needed immigration reform”.

Senate Republicans are coming under enormous pressure to return to Washington from their summer recess to vote on legislation on background checks that was passed by the House of Representatives earlier this year but has stalled in the senate.

Democrats rounded on the president for not urging action on the issue in his televised address.

“It took less than three hours for the president to back off his call for stronger background check legislation,” said Senate minority leader Chuck Schumer and House speaker Nancy Pelosi in a joint statement. “When he can’t talk about guns when he talks about gun violence, it shows the president remains prisoner to the gun lobby and the NRA,” a reference to the National Rifle Association, an influential pro-gun group.

“White supremacy is not a mental illness, and guns are a tool that white supremacists use to fulfill their hate.”

Earlier in the day, Mr Trump also appeared to blame the media for stoking “anger” and “rage” in the country, as the US continued to reel from the two back-to-back shootings.

In a tweet on Monday morning Mr Trump argued that the media has “a big responsibility to life and safety in our Country”.

“The Media has a big responsibility to life and safety in our Country. Fake News has contributed greatly to the anger and rage that has built up over many years,” he tweeted. “News coverage has got to start being fair, balanced and unbiased, or these terrible problems will only get worse!”