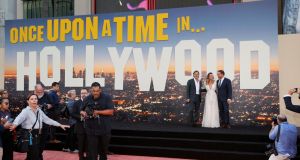 Leonardo DiCaprio, Brad Pitt and Margot Robbie at the premiere of ‘Once Upon a Time In Hollywood’, in Los Angeles, last month. File photograph: Mario Anzuoni/Reuters

Once upon a time... in America, it looked as if white men were at long last losing their tenacious grip on power. A black man had made it into the White House. A woman in hot pink claimed the gavel in the House. A Latina congresswoman with a Bronx swagger emerged as the biggest media star in the capital. Six Democratic women –five pols and one mystic – earned their spots on the stage in the first presidential debates.

Male candidates who might have jumped to the head of the presidential pack in earlier eras are finding it impossible to rise anywhere near double digits in polls. When I asked a friend who once worked for Barack Obama why a smart and appealing Obama protege, Sen Michael Bennet of Colorado, was having a hard time breaking through, she replied: “The bar is much, much higher for white guys these days. You just have to be especially special.”

In New York magazine, Madeleine Aggeler wrote “A guide to all the indistinguishable men running for president”. Under a picture of Steve Bullock, the governor of Montana, she wondered, “OK, this is clearly just Michael Bennet with a wig and a different name?” Under a picture of John Delaney, Aggeler offered a tip to remember which unmemorable white guy he is, “He looks like if a thumb split from the other fingers and went to dine at Hooters alone.”

White male privilege is out of fashion these days. Yet we are awash in nostalgia for it. Donald Trump has built a political ideology on nostalgia. And Quentin Tarantino has built a movie ideology on nostalgia. In The Los Angeles Times, Mary McNamara observed that the moral of Tarantino’s new fairy tale, “Once Upon A Time In... Hollywood”, is, “Who doesn’t miss the good old days when cars had fins and white men were the heroes of everything?”

In the New Yorker, Richard Brody called the movie, Tarantino’s biggest opening ever, “obscenely regressive”, a phrase that could easily be applied to the man in the Oval. Tarantino’s movie is about illusion, two TV entertainers clinging to a vanishing macho myth. Trump’s White House is about illusion, one TV entertainer clinging to a vanishing macho myth. Both the Tarantino creation and the Trump creation feature scripted tough-guy dialogue, rough treatment of women and slurs against Mexicans. (“Don’t cry in front of the Mexicans,” Pitt warns an emotional DiCaprio in a tinseltown parking lot.)

But – except for the usual burst of violence that the director justifies the usual way, by leveling it at the most evil people ever, in this case the Manson Family – Tarantino’s time machine is a gentler ride. (This may mark the first time “Tarantino” and “gentler” have appeared in the same sentence.)

Bathed in a golden glow, Brad Pitt plays a world-weary stunt man and handyman to Leo’s Western star, Rick Dalton. Pitt’s character is a former war hero in the great midcentury tradition of American cinema. He reflects many of the values that America once proudly stood for: toughness without belligerence, charm without smarminess, loyalty without question. He is masculine yet chivalrous. The iconic performance evokes other movie exemplars of the American male: Humphrey Bogart in Casablanca, Paul Newman in Cool Hand Luke, Steve McQueen in Bullitt, Clint Eastwood in Dirty Harry. (Pitt’s significant other is a pit bull named Brandy – another contrast with Trump, who avoids dogs.)

Trump’s time machine is a vicious and vertiginous journey, all about punching down, pulpy fictions, making brown and black people scapegoats and casting women back into a crimped era of fewer reproductive rights. Trump has inverted all the old American ideals, soiling the image of our country in the world and reshaping it around his grievances and inadequacies. He is a faux tough guy who lets other people do the fighting for him, a needy brat who never accepts responsibility for his actions, an oaf with no trace of courage, class or chivalry. While Pitt’s Cliff Booth is a study in stoicism and style, President Trump is a master class in whining and looking cheesy. One man lives by his word; the other never bothers to keep it. Tarantino fashioned his nostalgic world out of love, while Trump fashions his out of hate. His entitled and grabby ways illustrate why we need to leave that world behind. America is struggling to find a new identity with a more colorful mosaic, moving beyond our monochromatic past. More new heroines and heroes need to emerge, both onscreen and in life.

But first we need the credits to roll on Trump. – New York Times