US president Donald Trump lavishes praise on his wife Melania, who accompanied him throughout his first trip abroad as US president. Video: The White House 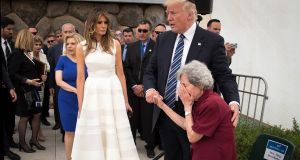 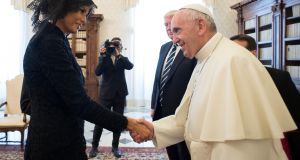 Pope Francis shakes hands with Melania Trump during their private audience at the Vatican on May 24th. Photograph: L’Osservatore Romano/via AP 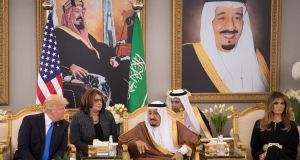 Melania Trump sits to the left of Saudi Arabian King Salman as he talks to her husband, US president Donald Trump, at the King Khalid Airport in Riyadh on May 20th. Photograph: Stephen Crowley/New York Times

It’s hard to imagine US president Donald Trump ever introducing himself to a roomful of reporters as “the man who accompanied Melania Trump to Rome”. But Trump could have borrowed John F Kennedy’s memorable line after he and the first lady visited the Vatican last week.

Kennedy said it during a trip to Paris in June 1961 when his wife, Jacqueline Kennedy, so dazzled the French that the president suggested, half in jest, that he was little more than a plus-one. “And I have enjoyed it,” he added.

Trump is not one for false modesty – nor, on his just-completed, nine-day foreign trip, was he one for news conferences. But like Kennedy in Paris, he did seem thoroughly upstaged when he introduced his wife to Pope Francis after an audience in the Apostolic Palace. The pope looked dour and pinched standing next to the president. Yet when Melania Trump shook his hand, a black mantilla draped over her hair, his face crinkled into a smile.

Gesturing to her husband, a mischievous Francis said: “What do you give him to eat? Potica?” Melania Trump looked taken aback by his reference to a dessert from her native Slovenia. “Potica?” she asked, then smiled. “Yes!”

Clearly tickled, she moved on before turning back to retrieve a rosary handed to her by a Vatican aide, which the pope blessed. (Her spokeswoman confirmed that Melania Trump is Roman Catholic; the last Catholic first lady was Jacqueline Kennedy.)

Later, as the Trump delegation was leaving, Melania Trump told the pope that she was visiting the Bambino Gesù children’s hospital in Rome later that day. She had written Francis a letter asking his permission to pay the visit. They wished each other good luck.

The day in Rome might have been the highlight of Melania Trump’s trip, which included plenty of humdrum moments where she stood stoically behind the president, staring ahead and saying nothing. In one sequence that was caught on video and prompted a flood of overheated speculation about the state of their marriage, the first lady flicked away her husband’s outstretched hand as they walked a red carpet after landing at Ben Gurion Airport in Tel Aviv, Israel.

Melania Trump was not the star of this first trip; that role could be played only by Donald Trump. But she was one of its most intriguing figures, at times sphinxlike, at times expressive, and always fashionable, with a glamorous wardrobe that rotated between Michael Kors and Dolce & Gabbana. She was the supporting player who occasionally stole the spotlight.

.@Potus & I are heading home after a very successful first International trip. Thank you to all of the host nations for your hospitality! pic.twitter.com/uWTgNgnA6O

“Historically, first ladies have made a difference on a trip like this,” said Michael Beschloss, a presidential historian. Kennedy, he noted, worried that Jacqueline would be a political liability because Americans would view her as elitist. But she was a sensation in France in 1961, charming Charles de Gaulle with her grasp of the French language and the country’s history.

She helped smooth the relationship between de Gaulle and Kennedy, and later, between Kennedy and the Soviet leader, Nikita Khrushchev. In doing so, she became a cult figure in the United States.

Our magnificent and wonderful person, our first lady, Melania

Given that Melania Trump has been a spectral presence in her husband’s White House – mostly staying in New York City with the couple’s son, Barron – this trip was a coming-out party for her. It may also offer a clue as to what kind of first lady she is likely to become: neither the independent-minded equal partner that Hillary Clinton was to Bill Clinton, nor the devoted, long-suffering spouse that Patricia Nixon was to Richard Nixon.

By the end of the trip, Donald Trump seemed to recognise her subdued star power. Speaking to American service members at the Sigonella naval air station in Sicily, he said the United States could not have a better emissary than “our magnificent and wonderful person, our first lady, Melania”.

“The countries of the world have a large number of disagreements,” he said, “but they all agree with me on that one – that I can tell you. So everywhere we go, it’s the same old story. So, great job.”

Melania Trump introduced her husband to the service members and spoke of the week as a milestone for her, as well. “This trip, for me, has been very special, and I will never forget the women and children I met,” she said. “As one of the kids at the hospital that I visit said in a picture he drew for me: We are all the same.”

There was something poignant about Melania Trump’s attempt to show a common touch. A former fashion model, married to a billionaire, who lives in a triplex penthouse in Trump Tower, she is never going to have an easy time persuading the downtrodden that she understands their problems. But she moved through those rituals gamely.

At the hospital in Rome, Melania Trump said, she spent time talking to a boy who was waiting for a new heart. A few hours after she left, she was told a donor had been found. “Receiving that news is a moment I will never forget,” she said. “I wish him a speedy recovery.”

Like Jacqueline Kennedy, Melania Trump has made her mark early on with fashion. Her outfits, like the pumpkin-coloured leather skirt she wore on the flight to Saudi Arabia and the olive-drab safari dress she wore once in Riyadh, spurred a thousand photographs and columns of analysis.

It also led to the one fashion tempest of the trip: a floral jacket with rich silk flowers, designed by Dolce & Gabbana, that she wore sightseeing at the Group of 7 meeting in Taormina. It retails for €46,000. Critics wondered how Melania Trump could justify wearing a jacket that cost only slightly less than the median household income in the United States.

Her defenders argued that she had chosen it carefully, given that the designer has roots in Sicily. Besides, Taormina is a flashy town full of aging playboys and rich Russians, not all that different from Palm Beach, Florida.

Either way, Melania Trump’s choice caught people’s attention, not an easy thing to do when her husband is Donald Trump.