Trump seen to weigh in behind protests against coronavirus restrictions 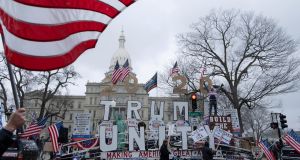 Supporters of the Michigan Conservative Coalition protesting at the state’s extended stay-at-home order outside the state capitol in Lansing. Photograph: Reuters/Seth Herald

US president Donald Trump appeared to weigh in behind several protests across the country against coronavirus restrictions despite declaring that governors could choose how and when to reopen states.

A series of demonstrations in Michigan, Ohio, Virginia and elsewhere in recent days have called for restrictions introduced to tackle coronavirus to be lifted. In one protest outside the state capitol in Lansing, Michigan, some demonstrators were armed and many wore Trump-themed clothing.

Another protest on Friday saw participants demonstrate outside the home of Minnesota’s governor.

A third tweet, urging the liberation of Virginia, added: “save your great 2nd Amendment. It is under siege!” – a reference to Americans’ right to bear arms.  Virginia’s Democratic governor recently signed into law new gun control measures.

All three states are run by Democratic governors, but are electorally important to the president in November’s presidential election.

Mr Trump’s apparent encouragement of the protesters came a day after the White House unveiled a new “three-phased approach” to reopening the US economy, but stressed that it was up to individual states to decide when to lift restrictions.

“Every state is very different. They’re all beautiful, we love them all, but they’re very very different,” Mr Trump said at Thursday night’s press conference.

The decision to give governors the authority to reopen their states marks a stark reversal from earlier this week when Mr Trump claimed he had “total authority” to decide when to reopen the country.

Tensions between the states and the federal government has been a consistent feature of the coronavirus crisis, which has now claimed more than 32,000 lives in the US.

The White House guidelines issued to governors envisage a three-phased approach to opening the economy.

Under the White House plan states deemed to have met certain criteria can enter phase one, which includes recommendations to restrict socialising for groups of more than 10 people, minimise non-essential travel and practice teleworking where possible.

Phase two would see schools reopening, non-essential travel would resume, while social settings of up to 50 individuals would take place.

Phase three would permits the full return of employees to work.

Among the criteria recommended by the federal government to qualify for each phase is that states should be showing a downward trajectory of Covid-19 cases and reports of influenza-like symptoms for at least 14 days.

However, experts have warned that the lack of testing in the US will pose a problem as states assess whether they have reached the required standards to reopen.

It also opens up the prospect of radically different approaches by different states. Already governors in states that have been hit the most by the virus, such as New York and New Jersey, have extended some form of lockdown until mid-May.

New York recorded an extra 630 deaths on Friday, while New Jersey, which has the second highest number of cases in the country, reported 323 new cases, pushing its total death toll close to 4,000.

President Trump has announced a three-phased plan to “reopen America”, but it will fall to individual state governors to implement the recommendations. States must show a fall in Covid-19 cases for 14 days before they can enter each phase. No information was given on when international travel into the US will be permitted. The guidelines state that people should continue to practise hand-washing and good hygiene in all phases, while anyone feeling sick should not go to work or school.

Individuals should maximise physical distance from each other in public places such as shopping areas and parks.

Gyms can reopen if they adhere to physical distancing, but bars will remain closed.

Large venues such as cinemas, churches and sporting venues can operate under strict physical distancing.

Telework should be encouraged by employers.

Large venues like cinemas, churches and sporting venues can open with “moderate” distancing guidelines in place.