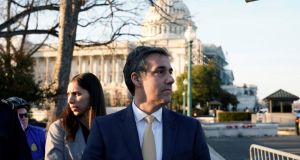 US president Donald Trump says his former lawyer Michael Cohen pitched a book to publishers that portrayed the US president in a favourable light, at odds with Cohen’s damning testimony to Congress.

In a tweet, Mr Trump said Mr Cohen’s manuscript was a “love letter” to him and said Congress should demand the manuscript as evidence Cohen’s testimony this week was “fraudulent” and “dishonest”.

Michael Cohen’s book manuscript shows that he committed perjury on a scale not seen before. He must have forgotten about his book when he testified. What does Hillary Clinton’s lawyer, Lanny Davis, say about this one. Is he being paid by Crooked Hillary. Using her lawyer?

...and the fraudulent and dishonest statements he made on Wednesday. No way, it’s time to stop this corrupt and illegally brought Witch Hunt. Time to start looking at the other side where real crimes were committed. Republicans have been abused long enough. Must end now!

Mr Cohen told a House panel that Mr Trump was a “racist, a conman and a liar”.

Reports last year indicated Mr Cohen was trying to pitch a book, one favourable about Mr Trump, and that Mr Cohen had an agreement with a Hachette Book Group imprint before his legal troubles ended the deal.

A person familiar with negotiations confirmed Mr Cohen’s book was submitted for auction, and that Hachette discussed an offer, but did not reach a deal. – AP