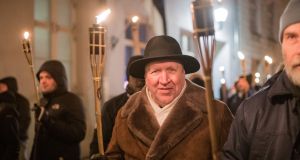 Mart Helme, leader of ERKE. He has tried to put pressure on the government over the Danske Bank money laundering scandal. Photograph: Getty Images

Estonia’s nationalist and Eurosceptic EKRE party is poised for significant gains when voters in the Nato frontline state elect a new parliament on Sunday.

EKRE is seeking to become the latest populist anti-immigration group to increase its support in EU elections. The party has tried to capitalise on damage to Estonia’s reputation caused by the €200 billion Danske Bank money laundering scandal, although polls suggest its support had increased before the case erupted last year.

The ruling centre-left Centre party leads polls with about 28 per cent, ahead of its traditional rivals, the centre-right Reform group, which began this current parliamentary term in power.

However, support for EKRE, which sits at about 17-20 per cent, looks set to more than double since previous elections. At a torchlight parade this week its leader demanded more autonomy for the country within the EU, and said Estonians refuse to “die out”.

Kristi Raik, director of the Estonian foreign policy institute, said the jump in support for EKRE mirrored the trend in other European countries where populist parties have exploited a fear of migration, despite there being very little in Estonia.

“They will be this kind of noisy opposition. It’s going to make life more difficult for the government, with the debate becoming more polarised on different issues. But it’s difficult to see that they have an impact on policymaking,” she said.

Mart Helme, the EKRE leader, has tried to put pressure on the government over the Danske case, and wrote to Estonia’s security services and prosecutors this week, urging them to publish all their information on the case.

Ms Raik said EKRE’s support had been stable for the past year, pre-dating the scandal, and that the Danske affair seemed to have no “impact on the election outcome”.

About €200 billion of money from ex-Soviet states flowed through Danske’s tiny Estonian branch until 2015. Local regulators only ordered the Danish bank to shut all its operations this month.

Juri Ratas, Estonia’s prime minister and Centre leader, said on Thursday after the last cabinet meeting before the elections that the country would consider whether to sue Danske for the damage to its reputation.

Estonia has a reputation as one of the most advanced and politically stable countries in eastern Europe, and tens of thousands of voters in the country of 1.3 million have already cast their vote online.

Much foreign attention was centred on a change of government in 2016 when the Centre party, popular with Estonia’s large ethnic Russian minority and with links to Russian president Vladimir Putin’s United Russia group, came to power.

But Centre maintained the foreign policy goals of previous governments. Estonia is one of the few Nato countries to spend 2 per cent of GDP on defence to counter the threat from neighbouring Russia.

Political scientists say one possible coalition is between Centre and Reform, although they have been fierce rivals in the current parliament.