Afghan women speak out: don’t trade away our rights 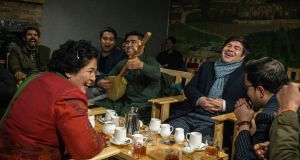 Laila Haidar enjoys tea and live music with her regular customers and friends at her restaurant, Taj Begum, in Kabul. Haidari runs a popular cafe that allows men and women to dine together, whether married or not, with or without a head scarf, and uses the profits to fund a rehabilitation clinic for drug addicts. Photograph: Kiana Hayeri/New York Times

It was a rare sight, even after 18 years of progress in Afghanistan: more than 700 women from across the country, gathered to send an unequivocal message to the men now negotiating with the Taliban. We want peace, the women said, but not at the cost of our rights.

The conference in Kabul, six months in the making, represented a watershed moment at a time when Afghans are struggling to comprehend what peace with the Taliban would bring, even as the war with the militant group is as deadly as ever. US diplomats are holding talks with the Taliban in Doha, Qatar, but the Afghan government is not involved.

Several women expressed fears that a peace deal could bring the Taliban back into the government, leaving women and girls vulnerable to a new wave of the sort of edicts that constrained their lives until the group’s overthrow in 2001. Women were routinely beaten for violating Taliban codes.

One woman at the conference, held inside an enormous tentlike structure, spoke sharply to President Ashraf Ghani shortly before he delivered a speech emphasising his support for women’s rights. “You should put killers in prison, not make peace with them,” said the woman, Nargiss Qurbani (48), who said the Taliban killed her husband in 1997 and later wounded her son, a soldier. Ghani did not respond.

The hundreds of women who attended came mostly from urban areas in 34 provinces. Most wore makeup, a superfluous embellishment when the Taliban barred women from showing their face. Many covered their hair with scarves, but a few left theirs defiantly uncovered.

Exactly one wore a burka – the all-encompassing garment that women were once required to wear by the Taliban. Attendees waved small Afghan flags as they sang a song celebrating the country’s women. They watched a video of scenes of pre-Taliban Afghanistan, where some women dressed in the latest fashions. Those scenes were juxtaposed with a recent image of the bloody aftermath of a suicide bombing.

Rula Ghani, Afghanistan’s first lady, urged women to take advantage of the gathering to express their views publicly. “Afghan women have their own voice, and now they’re raising it,” Rula Ghani said.

Her husband, in his speech, did not directly address the issue of women’s rights under any new government that could arise from a peace agreement. “You have been pushed aside, but today that has changed,” Ashraf Ghani told the women. “You are not a victim any more. You are making the future.”

The president’s speech was warmly received, but several women said in interviews that they wanted ironclad guarantees that women’s rights would be protected as part of any peace agreement. “We want peace, but we don’t want to lose our achievements,” said Aqilla Mustafavi (25). “We took a long road to reach here, and we don’t want to go back.”

But that framework reached between the Americans and the Taliban is contingent on reaching agreement on other issues, among them a ceasefire and direct negotiations between the Taliban and the Afghan government. The Taliban has refused to talk to the government, calling it illegitimate.

Afghan women have demanded a seat at the table if direct negotiations take place. Ashraf Ghani has announced a loya jirga, a traditional gathering of Afghans, for March 17th to discuss the peace process. The government has said women will make up 30 per cent of the attendees.

‘We can do everything’

In a separate speech on Thursday to members of the security forces, Ghani expressed scepticism about a ceasefire, telling troops to prepare for a possible Taliban offensive in the spring. At Thursday’s conference, Malalai Shinwari, a member of the High Peace Council, a government-appointed body, noted that delegations of women had spoken with 15,000 women across the country in preparation for the event.

“We have been told that women can’t travel and that they are not as good as men,” Shinwari told the gathering. “But now I think we can do everything.”

In an interview, a 52-year-old woman said she feared that the Taliban would kill her if they discovered she had attended the conference. The woman, who asked that only her first name, Latifa, be published, said she had lived in fear since the Taliban killed her husband, a police officer, six years ago.

Latifa said she left her village, which is controlled by the Taliban, after her husband’s death. But she said the Taliban had carried out attacks inside the city of Khost, where she now lives with her five daughters and four sons. “I came here to pass a message from the women of my village,” Latifa said. “We want peace. I don’t want my daughters to suffer the way I have.” – New York Times