U.S. President Donald Trump took on an adversarial tone with the media at his news conference on Thursday, at times cutting off reporters, telling them to sit down and accusing some reporters of being liars and asking bad questions. 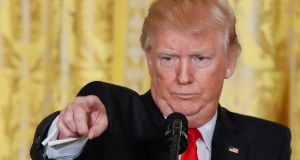 Donald Trump and his chief strategist, Steve Bannon, are winning the media war. And they’re winning because those of us who work in traditional journalism don’t understand what they’re after: the feel-bad factor (FBF).

We’re struggling to get our heads around the way they’re overturning two basic categories: good news and bad news.

Traditionally, governments are good-news merchants. Their default media strategy is to look out for anything positive that might be happening in society or the economy, and claim credit for it.

Sometimes, state policies truly have made good things happen; sometimes those things are just happening on a government’s watch.

In terms of what these people call “messaging”, it doesn’t really matter.

It’s a simple enough equation: if people feel good about things in general, they are likely to feel at least okay about the government.

Now, if you’re a traditional journalist, part of your job is to counteract this relentless stream of cheeriness.

You have to qualify and counterbalance the optimistic messaging, and remind your audience to look over here at this miserable thing that’s happening to these people.

Media are often accused of being too negative, but that’s part of the democratic dynamic.

The real music of a country will usually lie somewhere between the jovial trumpet blasts of the official version and the sour notes of the necessary naysayers.

But Trump and Bannon are not playing this tune. Their whole shtick is based on the FBF. Trump’s inaugural speech, with its evocation of “American carnage” was breathtakingly dystopian.

He understands that he has come to power by feeding – and feeding on – fear and despair. He has to keep those emotions high by evoking a Mad Max version of the US in which, of course, he himself is Mel Gibson.

There is an Eden in this mental geography, but it is located firmly in the past, a place where white men were in charge, women and minorities knew their places, good industrial jobs produced decent wages and personal pride, and the streets were safe.

Now, the shtick goes, the Chinese have stolen the jobs and only Trump stands between good white people and hordes of Mexican rapists and Muslim terrorists.

From their perspective, the best news is anything that supports a narrative of danger and decline. Success stories – unless Trump can claim direct personal credit for them – are bad news and, in this inverted logic, best buried.

Consider, for example, the greatest current success story of job creation in the US. There is an indigenous industry that is growing at a phenomenal pace, making American jobs for American workers.

This industry increased its workforce by an amazing 25 per cent in 2016 alone.

It is called solar power, and its growth is part of an even bigger good news story.

Recent official figures show 374,000 people working for solar firms, a 32 per cent rise in jobs in wind power in 2016 alone, and 2.2 million people now employed in manufacturing or installing energy-efficient products, an increase of 133,000 last year.

These jobs are being created, of course, in response to the climate change that Trump calls a hoax. So they are bad news.

At the same time as these figures were released last month, General Motors, one of the behemoths of a supposedly dying American industrial complex, announced its results for 2016.

GM was, of course, rescued from bankruptcy by the Obama administration against the fierce objections of Republicans. And it’s a great success story: last year, for the first time in its history, it sold more than 10 million vehicles.

But this great news for real factory workers is actually terrible news. Why? Because the GM boom is largely driven by sales to, of all places, China.

And China’s role in the Trump/Bannon FBF story is to steal American jobs, not to create them. So GM’s stellar results must be buried.

Or think about the “threat” of illegal immigrants. The actual good-news story is that the cities with the largest proportion of undocumented migrants are almost always among the safest in the US.

Those of us old enough to remember cowboy movies in which the outlaws were usually heading for El Paso might be surprised to know that El Paso has the lowest rate of violent crime of any large city in the US.

Indeed, most of the cities on the US side of the Mexican border are notably safe, in part because their police forces try to work with, rather than harass, immigrant communities. But that’s bad news too. It has insufficient carnage.

Yet none of these stories gets much play in the media. Trump and Bannon suck in all the oxygen and use it to pump up the FBF.

So long as they can do this, they are winning. And they’ll keep winning until traditional journalism gets its head around an unprecedented task.

Faced with government by gloom, journalists must steel themselves to accentuate the positive.