The Irish Times view on Iran-US tensions: a very real risk of war 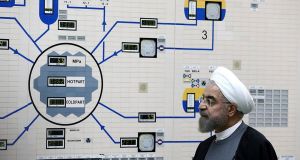 As a snapshot of the confusion and double-standards that characterise the Trump’s administration’s dealings with Iran, this was as good as any. Asked to comment on the announcement by Iran that its stockpile of enriched uranium will surpass limits set by the 2015 international nuclear deal 10 days from now, a spokeswoman for the US State Department responded by calling on Tehran to abide by its commitments under the agreement. This is the same deal that the US administration reneged on 13 months ago, when it formally repudiated the Obama-era accord and reimposed tough sanctions on the Islamic Republic.

Such muddled thinking would be amusing if it did not pose such a clear risk to global security. The Iranian announcement comes at a time of acute tensions between Iran and the US. It’s unlikely either side wants military confrontation, but the escalatory logic of recent weeks makes that a very real danger. Two attacks on oil tankers in the space of a few weeks have been blamed by the US on Iran. Tehran denies responsibility, and Washington has not provided conclusive evidence to back up its assertion. Given the US government’s record of false claims over Iraq in 2003 and Trump’s own casual relationship with the truth, US allies are rightly cautious about accepting the White House’s version of events.

Regardless of who was responsible for the attacks, which occurred in the Gulf of Oman, close to a key sea route in the global oil and gas trade, the US rhetoric risks backing Trump into a corner, leaving him in a position where he would feel compelled to respond to any further escalation.

Iran has plenty to answer for in the Middle East, not least its role in the Syrian conflict. But the current tension is the direct consequence of the US action in walking away from a nuclear deal that Iran was abiding by – and for no apparent reason other than Trump’s eagerness to undo the accomplishments of his predecessor. Trump insists he doesn’t want war. But his foreign policy is driven by two hawkish ideologues, Mike Pompeo and John Bolton, who have made no secret of their desire for regime change in Tehran.

The US, egged on by Saudi Arabia, hopes that its policy of “maximum pressure” will force Iran to make concessions, including in reducing its conventional weapons arsenal and reining in its activities in the Middle East. It was always more likely to have the opposite effect, strengthening hardliners in Tehran, pushing the regime to dig in and to test Trump’s resolve. Since the US pulled out of the nuclear deal, EU states have tried – and largely failed – to fill the economic gap by creating a new mechanism to enable trading with Iran despite US sanctions. But the latest move on uranium enrichment suggests growing frustration in Tehran. That, combined with US belligerence, leaves the situation on a knife-edge.

1 Coronavirus: What we know so far about how Ireland is affected
2 ‘I woke up the next day in a guy’s house covered in bruises’
3 What is coronavirus and what should I do if I have symptoms?
4 Coronavirus: Ireland plans for massive increase in tests
5 Mass gatherings due to go ahead in Ireland amid coronavirus outbreak
Real news has value SUBSCRIBE