Grenfell inquiry: ‘Long road to justice’ ahead as hearings begin 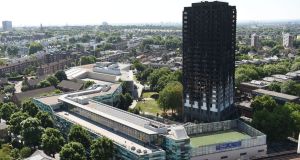 The Grenfell Tower public inquiry marks the beginning of a “long road to justice”, survivors and bereaved families have said on the first day of evidence hearings.

Fresh details about how the fire took hold with such deadly effect will emerge as the first phase of the inquiry into the disaster begins.

Expert reports detailing the cause of the inferno and why it spread so quickly are to be published as the inquiry hears an opening statement from its top lawyer.

Five reports will be made available in the morning, also examining the effectiveness of the fire protection measures within the building.

Seventy-one people were killed during the tragedy in Kensington, west London, on June 14 last year.

Another died in January after a long battle with a pre-existing condition, having never left hospital since the fire.

Grenfell United, the main body for survivors and bereaved families, said in a statement ahead of the hearing: “This is the beginning of a long road to justice for ourselves, our families, our community and for the 72 people who lost on the June 14th, 2017.

“The scale of the tragedy has devastated our lives and our community. What makes it even worse for us is the knowledge that these deaths were completely avoidable.

“We know there is a lot of evidence to come and this will be a long process. It is going to be difficult to see some organisations trying to defend their actions, but we have to trust that as the evidence emerges over the coming months, this inquiry will reveal the truth about how our community was treated before, during, and after the fire.

“Our biggest hope is that the truth leads to change. No community should ever suffer what we have, and the government must act to make sure that everyone is safe in their homes.”

The fact-finding stage of the inquiry will begin with an all-day address by lead counsel Richard Millett QC, following seven days of emotional family tributes to the dead.

A provisional schedule indicates that a submission from Harley Facades, the firm which installed the cladding on Grenfell Tower, will also be read into record.

It is suspected that the cladding system installed during a recent refurbishment aided the spread of the blaze.

Throughout the week, inquiry chairman Sir Martin Moore-Bick is to hear opening statements from a range of core participants.

This will include lawyers representing survivors and bereaved families, the Metropolitan Police, Kensington and Chelsea Council and firms involved in the block’s final refit.

The hearings will take place at Holborn Bars in central London.

On Monday reports are expected to be released from:

- Professor Niamh Nic Daeid, who will analyse the “the cause and spread of the fire in the flat of origin and the spread of fire within and out of that compartment”.

- Professor Luke Bisby, who will provide insight into “the ignition of the facade materials (including the cladding and insulation) and the fire spread over the building’s external facade”.

- Dr Barbara Lane, who will give evidence on “the fire protection measures within the building and preliminary conclusions on the extent to which they failed to control the spread of fire and smoke and contributed to the speed at which the fire spread”.

- Professor Jose Torero, who will give findings on the spread of the fire through the building.

- Colin Todd, who will review the “different statutory and regulatory requirements in force over the lifetime of Grenfell Tower”.

Both the reports’ release and the inquiry hearing will take place at 10am. – PA