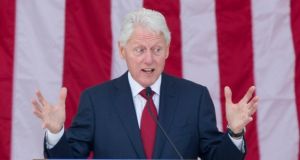 Book tours can be brutal. It took 20 years for Bill Clinton to be properly publicly shamed for the ugly bargain at the heart of the Clinton operation. As a politician, the former president was gifted. James Carville liked to say: “People are confused. They don’t know which one they like more, the peace or the prosperity.” Even Barack Obama, another talented pol, was forced to turn to his former nemesis to help sell his agenda for his second term, christening Bill the “Secretary of Explaining Stuff.” And if Hillary had listened to Bill’s urgent warnings about addressing the alienation of white men in flyover country in 2016, she’d be president.

Bill Clinton was so popular that, during his cascading scandals with women, some political analysts on the left suggested that Americans should look at a commander in chief in terms of private character and public character, disregarding personal peccadilloes and giving weight only to policy decisions. But with the Clintons, the public and private were always intertwined in an inextricable and unappetising way. The desire among his supporters for a liberal agenda was held hostage to Bill Clinton’s libertine appetites. Let Bill be regressive and transgressive with women he was attracted to, and he would be progressive for all women. You want enlightened policies for women and a record number of women in exalted posts? Then you must endure – and cover up for – “Saturday Night Bill”, as the dark side of the president was dubbed.

So it came as a surprise to him when he had no more skirts to hide behind when Craig Melvin asked on the Today show whether his actions in the 1990s would fly in the #MeToo era. Bill went to his usual go-to: his excellent record on appointing women. But that Faustian deal of doing good for all women while being bad with a few was no longer on the table.

“How would you have approached the accusations differently, or would you have?” Melvin asked. “Well,” he replied, “I don’t think it would be an issue because people would be using the facts, instead of the imagined facts.” So here are the facts, which were as clear 20 years ago as they are now. When Monica Lewinsky came into the Oval Office and flashed her thong, Bill Clinton should have said: “Young lady, go back to your office. I am the president of the United States. ” Like Humphrey Bogart in Casablanca, Bill should have been doing the thinking for both of them.

The power differential between a 22-year-old intern and a 49-year-old boss makes any sexual interaction wrong. And if you throw in the fact that he was president – the country’s parent and someone serving in loco parentis for the youngest White House staffers – it’s an inexcusable abuse of power. Gloria Steinem was off base when she tried to bolster Clinton in a New York Times op-ed as the scandal unspooled, writing that “welcome sexual behaviour is about as relevant to sexual harassment as borrowing a car is to stealing one”.

It took Lewinsky herself 20 years to sort through the trauma and start moving beyond what she calls her PTSD. As she wrote in an eloquent Vanity Fair piece published in March: “I’m beginning to entertain the notion that in such a circumstance the idea of consent might well be rendered moot.”

It was Trump-level narcissism and selfishness on Bill Clinton’s part to force the high-ranking women in his inner circle – Hillary, Madeleine Albright and Donna Shalala – to go before the cameras and vouch for him when he knew the truth and could simply have admitted it, rather than lying, parsing and besmirching.

The feminists lost their way performing as human shields, letting Clinton Inc demonise the willing and unwilling women in Bill’s life and treat them as collateral damage, human sacrifices to the sisters’ dream of a feminist president and first lady.

Bill Clinton tried his usual trick of scapegoating, as he and his co-author, James Patterson, evoked JFK and LBJ to Melvin. That was an unpleasant echo of Clinton aides calling around to reporters during the 1998 spiral to say that JFK had fooled around with young women at the White House. But by 1998, feminism had been flowering for 30 years. And JFK was no role model in that regard.

Monica Lewinsky has finally emerged from a long period of being frozen in amber, after the capricious behaviour of Bill Clinton and the smearing of Clintonworld. And that’s a relief. And Bill Clinton has learned that his threadbare routine of maudlin self-pity and casting blame on everyone but himself doesn’t work any more. And that is a relief. The definition of “is” doesn’t depend on anything. It just is.