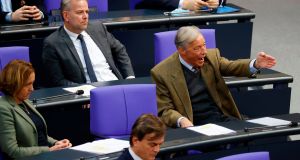 Members of Germany’s far-right Alternative for Germany (AfD) party: After years of AfD insults and provocation, MPs lined up to warn the party it had gone too far. Photograph: Odd Andersen/AFP

For months Germany’s far-right Alternative für Deutschland has struggled politically, as chancellor Angela Merkel’s steady hand in the Covid-19 pandemic has pushed her ruling Christian Democratic Union to a record 37 per cent.

This week, just as the AfD slipped in polls to single digit support, it snatched back the political spotlight by inviting a seething Berlin street protest against coronavirus restrictions into the heart of the German parliamentary system.

It happened on Wednesday morning, as MPs and ministers hurried into the Bundestag lower parliamentary chamber, beneath the iconic glass dome, to debate and vote on a revised Covid-19 pandemic Bill.

Amid a growing siege atmosphere, Berlin police were deploying water cannon outside to push back Covid-19 protesters and conspiracy theorists from parliament. Inside a group of visitors prowled the parliamentary corridors, haranguing passing politicians.

In a video posted online, an overwrought woman can be heard attacking economics minister Peter Altmaier as an “asshole, a puffed-up little wanna-be king”.

Word spread quickly that aggressive visitors were doing the rounds.

“We got an email telling us to lock our doors from the inside, it was a terrible feeling that the protest from outside was now inside,” said one adviser to an opposition Green Party MP. “I sent our office staff home because we couldn’t guarantee their safety. I  told them to leave by the back door.”

On Friday, news that the Bundestag agitators were all invited day guests of an AfD parliamentarian prompted an emotional emergency debate.

After Bundestag president Wolfgang Schäuble promised to use every legal means against those responsible, AfD floor leader Alexander Gauland apologised for what he called “uncivilised” and “ill-mannered” behaviour.

“We should have . . . supervised the visitors, the situation got out of hand,” he said, to the kind of derisory howls more familiar to the House of Commons than the German Bundestag.

After months of struggle and in-fighting, the AfD hopes to revive its political fortunes with an all-out attack on what it calls Germany’s “Covid dictatorship”. It opposed this week’s legislation to replace emergency Covid-19 decrees, such as restricting gatherings and masks. As well as greater legal certainty before the courts, the new legislation gives Bundestag MPs added oversight of emergency powers granted to the Merkel administration.

In the mainstream parties’ rush to get the Bill through in weeks rather than months, however, they failed to offer a clear political narrative about what was going on – and what wasn’t.

The AfD was quick to fill the narrative gap, insisting the new Bill was an “enabling Act”, a provocative term usually only used in Germany to describe the 1933 Bill that disempowered the Weimar Republic parliament and allowed the Nazis rule by decree.

On Friday morning, shaken by Wednesday’s corridor confrontations and faced with this skewed historical comparison, something finally snapped among the six other Bundestag parties.

After enduring three years of AfD needling, insults and provocation, one MP after another lined up to warn the party it had finally gone too far. “You don’t impress us,” said Michael Grosse-Brömer, CDU floor leader. “This democracy has learned from Weimar, is steadfast and well-fortified, you will not achieve what you want.”

While some MPs’ debate contributions verged on hysterical, others delivered calm dissections of how the AfD’s arrival had coarsened debate and poisoned the parliamentary atmosphere.

Barbara Hendricks, a former Social Democrat (SPD) minister, recalled a friend who ordered a vegetarian dish in the Bundestag canteen hearing from a nearby AfD official: “We’ll get you seed-munchers, too.”

As the dust settles on the AfD’s most daring stunt to date, some Berlin observers see mainstream parties still unsure how to tackle a populist rival abusing the tools of democracy as weapons against the political system itself.

Some political scientists suggest that the current political strategy towards the AfD – moral outrage – may prove as ineffective as the previous strategy, of ignoring them.

“For sure the AfD has Nazis in its ranks but the reaction of the others is often overblown and not differentiated enough,” said Prof Barbara Zehnpfennig, philosopher and political scientist at the University of Passau. “Outrage is understandable, given German history, but acting as if fascism is knocking at the door lends the AfD too much importance.”