Coronavirus: Diwali moves India into second place behind US for cases 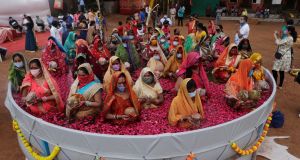 India’s number of coronavirus cases has passed nine million, the world’s second highest total after the US.

The federal health ministry on Friday reported 45,882 new infections and 584 deaths over the previous 24 hours, taking India’s death toll from the virus to 132,000.

The federal capital, New Delhi, remained the country’s worst-affected region, with city officials recording an average of about 8,000 virus cases daily over the past week.

Local authorities have responded with an fourfold increase in the fine for failing to wear a face mask in public to 2,000 rupees (€23), and were contemplating additional emergency restrictions.

Officials said a majority of new cases were triggered by excessive pollution – 180 times the limit recommended by the World Health Organisation – and last Saturday’s Diwali, India’s annual festival of lights, when the capital’s bazaars were teeming with people who were neither masked nor observing social distancing.

Millions of residents, in violation of an official fiat, also indiscriminately burst sulphur-loaded crackers on Diwali night, gravely adding to the pollution. Experts say the virus remains active for longer periods in a polluted environment.

Tens of thousands of people across Delhi also gathered on Diwali night to play three-card poker, in keeping with a centuries-old belief that whoever gambled on this occasion would prosper in the upcoming year.

“We are truly in a very critical situation right now,” said Dr Naresh Trehan, one of Delhi’s leading medical specialists. “What we are seeing today with regard to the high number of virus cases in the city is a mostly hangover of Diwali,” he added.

Other experts said the number of those afflicted by Covid-19 was expected to rise exponentially across Delhi, as the incubation period for the virus can be seven to 10 days.

Delhi’s hospital situation is also alarming. Officials said 90 per cent of available critical care beds with ventilators and 86 per cent without ventilators in government-run hospitals were occupied on Thursday.

The virus also spread in other parts of India during the festival season, with the authorities in prime minister Narendra Modi’s western home state of Gujarat announcing a “total weekend curfew” in the largest city, Ahmedabad, from 9pm on Friday to Monday morning.

During this period only shops selling food and medicines will be allowed to operate in the city, which added nearly 3,000 active virus cases on Thursday.