US president calls off New Hampshire event but travels to Florida where 11,000 new cases reported 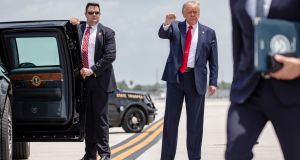 US president Donald Trump arrives at Miami International Airport in Florida for a briefing on efforts to stop the flow of drugs coming into the country. Photograph: Samuel Corum/The New York Times

US president Donald Trump postponed a planned rally in New Hampshire scheduled for Saturday, citing a weather warning, amid signs of growing public dissatisfaction with his handling of the coronavirus pandemic.

A new ABC-Ipsos poll found that 67 per cent of respondents disapproved of his handling of the virus outbreak, which has claimed more than 130,000 American lives. This is the highest level of public dissatisfaction in the president since the crisis began.

Mr Trump was due to hold his second election rally since the outset of the coronavirus outbreak on Saturday, after a disappointing attendance at his comeback rally in Tulsa, Oklahoma last month.

But on Friday he tweeted that the rally, which had been due to take place in an airport hangar in Portsmouth, New Hampshire, had been postponed due to the expected arrival of Tropical Storm Fay in the region. “Stay safe, we will be there soon!” he wrote, adding the hashtag #MAGA, a reference to his “Make America Great Again” slogan.

The New Hampshire Democratic Party had criticised Mr Trump’s decision to hold a rally in the state, claiming he was putting residents in danger from coronavirus. The state’s Republican governor, Chris Sununu, defended the president’s right to hold the event but said he would not be attending.

Mr Trump, however, pressed ahead with a visit to southern Florida on Friday, despite a spike in cases in the area.

The president visited the US Southern Command for a briefing on efforts to stop the flow of drugs coming into the country.

Addressing personnel at the centre, Mr Trump said his policies had resulted in the interdiction of more than 120 tonnes of illicit narcotics in the last 12 weeks and the arrest of more than 1,000 drug traffickers.

“The American military is much more powerful, much more lethal and much more prepared than we’ve ever been before,” he said.

Miami-Dade County accounts for about one-quarter of all coronavirus cases in Florida, which has emerged as a Covid-19 hotspot in recent weeks.

On Friday, the state reported more than 11,000 new cases while on Thursday it reported a record 120 daily deaths.

Coronavirus cases in the US have surged to more than 3 million, with states in the south and west of the country particularly affected by the spike in infections.

In Arizona, which has also seen a rise in infection rates in recent weeks, two people were arrested in a Walmart in the southern town of Yuma after refusing to wear face masks and coughing on employees.

The rise in numbers comes after White House coronavirus expert Anthony Fauci told the Financial Times that he had not briefed Mr Trump in two months, despite the surge in cases.

“I don’t think it’s an exaggeration to say we have a serious ongoing problem, right now, as we speak,” he said. “What worries me is the slope of the curve. It still looks like it’s exponential.”

In an interview with Fox News Mr Trump said that the infectious disease expert was “a nice man, but he’s made a lot of mistakes”.

As he left for Miami on Friday, Mr Trump also announced that he was directing the treasury department to review some universities and schools’ tax-exempt status – a major source of financial security for some education institutions - claiming that “too many Universities and School Systems are about Radical Left Indoctrination, not Education.”

“Our children must be Educated, not Indoctrinated!” he wrote on Twitter.