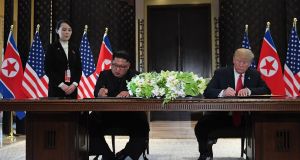 The increasingly powerful sister of North Korean dictator Kim Jong-un has dismissed the idea of another summit with Donald Trump this year, saying there was no point without substantial reward for Pyongyang.

Kim Yo-jong said on Friday that another meeting betwe

en her brother and the US president was unlikely, although “a surprise thing may still happen”, according to the North’s official Korean Central News Agency.

Her comments come as Stephen Biegun, the US special envoy for North Korea, wrapped up a trip to the region aimed at reviving stalled nuclear talks with Pyongyang. Mr Biegun said during his three-day visit to Seoul that Washington was open to discussions and supported South Korea’s efforts to improve inter-Korean relations.

Nuclear talks have made little progress since the two leaders first met in Singapore two years ago as Washington has refused to ease sanctions in response to North Korea’s offer to dismantle part of its nuclear facilities.

“Given the differences in opinion between the two countries, it wouldn’t be beneficial or necessary for the two sides to meet unless there is a decisive change in the US stance toward North Korea,” Ms Kim said.

Ms Kim, a close adviser to the North Korean leader, has led the country’s recent pressure campaign against Seoul that culminated in blowing up the inter-Korean liaison office last month near the border with South Korea.

But she struck a softer tone towards the US, saying North Korea had no intention of threatening Washington so long as it was not provoked.

Ms Kim’s role in North Korea has come under increasing attention after her brother failed to appear at an important national celebration, prompting reports that Mr Kim was in ill health. North Korea experts say she could be involved in leading the country should her brother die.

Ms Kim stressed the need for North Korea to prepare to deal with leaders other than Mr Trump, as Washington could revive hostilities with Pyongyang despite the rapport between her brother and the president.

Analysts expect North Korea to remain reluctant to hold serious talks with Washington ahead of the US presidential election in November.

“Given the less than 10 per cent chance of Trump’s re-election, North Korea has no reason to give him another photo-op,” said Kim Jae-chun, a professor at Sogang University in Seoul and a former government adviser.

“The Kims are well aware that Trump wants the summit more than them, so they want to haggle for a bigger reward such as sanctions relief before holding any further talks.” – Copyright The Financial Times Limited 2020