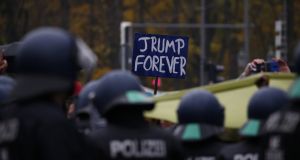 A protester raises a placard reading Trump Forever as police look on during a protest next to the Reichstag against modifications to a law during the second wave of the coronavirus pandemic in Berlin, Germany. (Photo by Michele Tantussi/Getty Images)

Germans looked on at events at this week’s Washington riot with a familiar, sinking feeling.

Six months ago, a small group of far-right and esoteric extremists, on the fringes of an anti-Covid restrictions march, rushed the steps of the Reichstag parliament building in Berlin.

Faced down by three police officers, the mob failed to get inside, but an image of that day stands out: a protester waving an old German imperial flag, beloved of Kaiser loyalists, with two additions: the face of Donald Trump and the “Q” of the QAnon conspiracy theory.

The link in minds here between Germany’s past and the US’s present has hardened further with Trump’s unsubstantiated “stolen vote” claim ,sparking memories of another myth a century ago that paved Adolf Hitler’s path to power.

For all the very different circumstances – above all, Trump is certainly no Hitler – the question for many Germans is whether the Washington riot over a “stolen” vote marks the end of the rise of US populism, or merely concludes the overture.

Leading historians specialising in Germany, such as Prof Richard Evans, have explored the consequences of the “stolen” vote myth.

“This has some parallels with the German generals who knew they were defeated in the first World War but were casting about for some kind of explanation and lit upon the revolutionary left who overthrew the Kaiser,” said Evans, author of many best-selling books on the Nazi era.

One, The Hitler Conspiracies, analyses the many plots that aided the Nazi leader’s rise to power, including the so-called Dolchstosslegende, or stab-in-the-back myth that began to swirl in Berlin in early 1918.

Its name is a nod to the Richard Wagner opera Götterdämmerung, in which the vital hero, Siegfried, is stabbed by his enemy Hagen with a spear in the back. In the post-1918 context, the theory was founded on a deep public trauma at Germany’s apparent sudden loss of the war, based in turn on ignorance about the parlous state of the campaign.

The theory’s most energetic peddlers were the German generals who had known for most of 1918 that the war was lost – while declaring the opposite in public.

Both press and population were totally unprepared for the collapse. All was well in their bubble of German wartime propaganda, as resistant to external contradictory information as today’s alt-right online platforms.

Insisting their army had been “undefeated in the field”, narcissistic generals repackaged their own military defeat as others’ treacherous defeatism. In time the stab-in-the-back myth turned into three self-contained blame games, pointing the finger variously at an unpatriotic – in reality starving – public, a revolutionary left and conniving Jews – the latter the strand seized on by the Nazis as a winning platform.

German soldiers, failed by their own generals more than the war-weary home front, sensed looming defeat and on November 3rd, 1918, German sailors mutinied when ordered to sail out for, in their eyes, a pointless last stand against the Royal Navy. Within a week the revolutionary mood had swept through Germany and the Kaiser was forced to abdicate.

As Donald Trump leaves office, insisting he was undefeated at the polling station, Evans suggests the German-American president lacks the focus and consistency required as a proper coup leader. Unlike the wobbly inter-war German democracy, the US constitution and its institutions have demonstrated their robust stability.

But with polls suggesting a majority of Republic voters believe the election result was illegitimate, Evans sees a more divisive US future possible in the hands of a more skilled populist than Trump.

He has left as political legacy a stolen election theory that is as vague and elastic enough to suit Trump supporters’ needs as the century-old German myth.

In 1922 Austrian philosopher Otto Weininger, whose theories were adopted later by the Nazis, wrote: “You can prove and refute anything but it [the stab-in-the-back myth] has become a fact that every German has in his blood...”

Even though it was demonstrably untrue, the Dolchstosslegende was believed by enough people to gain momentum in the inter-war period as an essential truth, for which its supporters required no empirical verification.

And even without majority support, the Weimar Republic was so delegitimised by the stab-in-the-back myth that when Germans of that era referred to peace time, they meant the “good old days” of the Kaiser era.

Today’s stolen vote myth, stoked by the outgoing president, leaves president-elect Joe Biden with the impossible task of proving to Trump supporters he is their legitimate president.

For Evans, a self-described “historical materialist”, the incoming president-elect’s best bet is not to mull on the past but get to work in the present: “If Biden can solve some of the US economic problems, in particular get under control the economic effects of Covid, he may appease some Trump supporters.”