‘We have never seen anything like it’: Four dead as Storm Philomena hits Spain 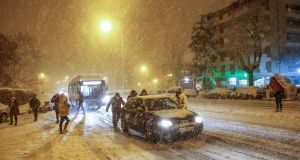 A storm in Spain killed four people, paralysed travel and blanketed the capital Madrid in so much snow on Saturday that skiers took to the main Gran Via thoroughfare.

Troops rescued drivers trapped by snow as Storm Filomena caused travel chaos across the country, with Madrid seeing the heaviest snowfall in decades.

The airport in Madrid was closed and skiers glided down Gran Via, normally one of the busiest streets in the capital.

“It is astonishing, we have never seen anything like it before,” said Marcos (30).

One man and a woman in a car drowned after a river burst near Malaga in the south, while two homeless people froze to death in Madrid and Calatayud in the east, officials said.

“Let’s avoid travel and follow the instructions of the emergency services,” tweeted prime minister Pedro Sanchez. “Let’s be extremely careful in the face of the storm #Filomena.”

Aena, which controls the country’s airports, said Madrid’s Barajas airport, which closed on Friday night, would remain closed for the rest of Saturday. It said at least 50 flights to Madrid, Malaga, Tenerife and Ceuta, a Spanish territory in North Africa, were cancelled, according to Aena.

The State Metereological Agency said it was the biggest snowfall in Madrid since 1971, and a meteorologist from Spanish National Radio said that between 10in and 20in (25cm and 50cm) fell in Madrid, making it the largest snowfall since 1963.

Soldiers worked to reach drivers stranded for hours on roads around Madrid. “We continue the rescue of vehicles on the A4, A5, M40 and M607,” tweeted the Unit for Military Emergencies, which deployed 147 soldiers.

Patricia Manzanares, who was trapped in her car on the M-40 motorway in Madrid since 7pm on Friday, told RTVE television: “I have been stuck here without water or any other help.”

The head of the Madrid region’s emergency service, Carlos Novillo, appealed for people not to go out in their cars.

“We have worked intensely. We have rescued 1,000 vehicles. We ask for patience, we will reach you all,” he said.

Madrid and four other regions were on red alert on Saturday as more heavy snowfalls were forecast, according to the State Meteorological Agency – Reuters