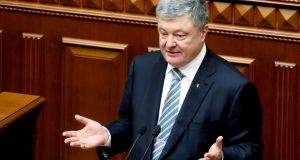 Ukrainian president Petro Poroshenko: there are claims he has failed to tackle graft and governs through backroom deals with cronies. Photograph: Valentyn Ogirenko

Ukrainian president Petro Poroshenko’s reform record is under fresh scrutiny a month before he seeks re-election, after his country’s top court quashed a key anti-corruption law and embezzlement claims swirled around a close ally.

The constitutional court in Kiev annulled a law on illicit enrichment this week, forcing Ukraine’s anti-corruption agency (Nabu) to scrap some 65 cases against deputies, judges, prosecutors and state officials whose wealth has aroused suspicion.

Nabu said the ruling was “politically motivated and contradicts Ukraine’s obligations under the ratified UN convention against corruption and agreements with the International Monetary Fund and European Union. ”

“The decision . . . is a step backwards in the anti-corruption struggle of Ukraine and a step towards the revenge of the old system,” Nabu added, referring to how the country was run before a 2014 revolution sparked by anger over graft and impunity.

Transparency International Ukraine and other NGOs jointly said the verdict “effectively invalidates the entire anti-corruption reform” of recent years, and urged the court “not to compromise Ukraine’s future for the sake of the political elite wishing to rob the country and remain unpunished”.

Mr Poroshenko’s rule faces a reckoning at the ballot box on March 31st, amid criticism that the confectionery billionaire has failed to tackle graft and governs in the old style of backroom deals between political and business cronies.

He announced on Thursday that he was proposing a new Bill on illicit enrichment to parliament, which takes into account the court’s finding that the previous law contravened a defendant’s right to the presumption of innocence.

Analysts noted that adoption of the now-defunct law in 2015 was a condition for Ukraine to receive a bailout from the IMF and for its 45 million citizens to be granted the right to visa-free travel to the EU.

Ukrainian foreign minister Pavlo Klimkin said a new and watertight anti-graft law should be introduced quickly to avert “a serious crisis of confidence with our friends and partners”.

The controversy is unlikely to help Mr Poroshenko win what polls suggest will be a close race for the presidency with former prime minister Yulia Tymoshenko and comedian and political newcomer Volodymyr Zelensky.

Ms Tymoshenko called this week for Mr Poroshenko to be impeached over media claims that the son of one his confidantes, Oleh Hladkovskyi, was part of an alleged defence industry embezzlement scam; Mr Hladkovskyi denies wrongdoing but has been suspended from his post on Ukraine’s national security and defence council.

“We have been on different sides of the barricade of values for a long time. Recent events just confirmed that,” wrote one of them, former investigative journalist Mustafa Nayyem. “I went into politics after the revolution . . . and don’t want to be linked to those who are openly leading the counter-revolution.”