Trump hits out at Germany ahead of Nato summit

‘Unfair’ that US spends ‘far more’ on alliance than any other country, US president says 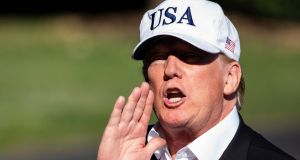 US president Donald Trump will attend the Nato summit in Brussels as part of a seven-day visit to Europe. Photograph: Samuel Corum/New York Times

US president Donald Trump has attacked Germany and other US allies in Europe for spending too little on defence just one day before he flies to Brussels to attend what some fear will be a contentious Nato summit.

Mr Trump said it was “unfair” that the US spent “far more” on the transatlantic security alliance than any other country. While he has attacked Nato previously, his comments will further raise concerns that the US president intends to upend the Nato summit in a similar way to the recent G7 in Canada.

“While these countries have been increasing their contributions since I took office, they must do much more. Germany is at 1%, the US is at 4%, and NATO benefits Europe far more than it does the US,” Mr Trump tweeted on Monday.

Mr Trump has this year repeated the attacks on Europe and Nato members that he launched during the presidential race over everything from trade practices to defence spending. He recently said Europe was “as bad as China” in its trading practices. On Monday, he added: “On top of this the European Union has a Trade Surplus of $151 Million with the US, with big Trade Barriers on US goods. NO!”

Mr Trump will attend the Nato summit in Brussels as part of a seven-day visit to Europe during which he will spend time in England and Scotland before heading to Helsinki for his first summit with Russian president Vladimir Putin. Ahead of the Nato summit, US allies in Europe have become concerned by suggestions that Mr Trump wanted to withdraw some of the 35,000 US troops stationed in Germany, something that the White House has denied.

Nato members are also concerned that Mr Trump could further damage the security alliance by taking a tough stance against US allies while in Brussels, and then holding a more cordial summit with Mr Putin, who is keen to undermine the alliance that has long been a thorn in Russia’s side.

While Nato members are nervous, they say they have worked well with US officials to secure agreement on the planned agenda. Many of the proposals appear uncontentious, including the “30 times four” plan to expand the alliance’s high-readiness forces, under which Nato would ensure that 30 land battalions, 30 ships and 30 warplane squadrons were ready to deploy on 30 days’ notice.

European diplomats say more Nato members have met or have credible plans to reach a 2014 target to spend the equivalent of 2 per cent of GDP on defence. At least 17 – up from 15 earlier this year – are on course to meet the goal, with Croatia among those who have joined the list, diplomats say.

European officials also point to the positive messages from US officials other than Mr Trump. Kay Bailey Hutchison, US ambassador to Nato, last week said the “major overall theme” of the summit was “Nato’s strength and unity”. However, US officials frequently play down the potential for controversy, only to see Mr Trump come to rhetorical blows with other leaders.

Diplomats acknowledge that Mr Trump could lash out, particularly if any European leaders try to push back at him over defence spending or lecture him on how to handle his July 16th summit with Mr Putin.

Analysts say a possible target for Mr Trump if he decides to act on his spending criticism might be cuts to Washington’s European Deterrence Initiative, which has grown from $789 million in 2016 to a proposed $6.5 billion next year.

The money is part of a broader rise in the US presence in Europe since Russia annexed Crimea in 2014, with funds for next year provisionally allocated to areas including support for anti-submarine warfare and deployment of armoured brigade combat teams and fighter aircraft. – Copyright The Financial Times Limited 2018