US president renews attack on Robert Mueller, describing him as ‘disgraced and discredited’ 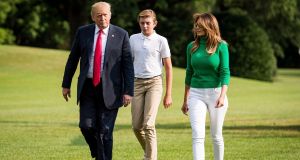 US president Donald Trump on the South Lawn of the White House on Sunday with first lady Melania Trump and their son Barron. Photograph: Pete Marovich/EPA

In a series of tweets on Monday, Mr Trump claimed that Mr Mueller, the former head of the FBI, was using his 15-month-long investigation into Russian interference in the 2016 election as a vehicle to hurt Republican chances in the November midterm elections.

The barrage came two days after it emerged that Mr Trump’s White House lawyer Don McGahn had co-operated in a series of interviews with Mr Mueller’s team. Deliberations were also continuing on Monday in the tax and bank fraud trial of Mr Trump’s former campaign manager, Paul Manafort.

“Disgraced and discredited Bob Mueller and his whole group of Angry Democrat Thugs spent over 30 hours with the White House Councel [sic] Dems are looking to impact the election. They are a National Disgrace!” Mr Trump wrote, in a reference to the Democratic Party.

The New York Times first reported that Mr McGahn had decided to be forthcoming with investigators amid concerns that Mr Trump would use attorney-client privilege as a means to transfer blame to Mr McGahn for any possible illegal acts of obstruction. Mr Trump countered by taking credit for allowing Mr McGahn to testify and claiming that the lawyer had given testimony in his favour.

Mr Trump has stepped up his attacks on Mr Mueller’s investigation – and Mr Mueller personally – in recent weeks, as he and the White House raise their concerns that the inquiry could be used to hurt Republican chances in the November 8th midterms.

Disgraced and discredited Bob Mueller and his whole group of Angry Democrat Thugs spent over 30 hours with the White House Councel, only with my approval, for purposes of transparency. Anybody needing that much time when they know there is no Russian Collusion is just someone....

....looking for trouble. They are enjoying ruining people’s lives and REFUSE to look at the real corruption on the Democrat side - the lies, the firings, the deleted Emails and soooo much more! Mueller’s Angry Dems are looking to impact the election. They are a National Disgrace!

Republicans claim that if Democrats win the 23 seats needed for the party to take back the House of Representatives, they are likely to begin impeachment proceedings against Mr Trump, while a divided Congress would imperil Republicans’ legislative agenda.

Since his investigation began in May 2017, Mr Mueller and his team have indicted four former members of Mr Trump’s campaign. Only one of those individuals – Mr Manafort – did not reach a plea bargain with investigators or plead guilty.

On Monday, jurors in Alexandria, Virginia, began a third day of deliberations in the fraud trial of Mr Manafort. The lobbyist and former Trump campaign manager faces 18 criminal counts, including filing false tax returns and failing to report foreign bank accounts to the US government.

A conviction of Mr Manafort would be a major boost to Mr Mueller’s investigation, and a setback for the White House. A recent CNN opinion poll found that fewer than half of Americans approved of Mr Mueller’s handling of the investigation and that two-thirds of the country would like to see the probe end before the midterms.

The letter, signed by 177 former national security officials appointed by both Republicans and Democrats, accused Mr Trump of acting against Mr Brennan because Mr Brennan had criticised him.

The signatories stated “our firm belief that the country will be weakened if there is a political litmus test applied before seasoned experts are allowed to share their views”.

In a Twitter rant following his rant about Mr Mueller and another about the New York Times , Mr Trump called Mr Brennan a “political ‘hack’”.

“I hope John Brennan, the worst CIA Director in our country’s history, brings a lawsuit,” the president tweeted . “It will then be very easy to get all of his records, texts, emails and documents to show not only the poor job he did, but how he was involved with the Mueller Rigged Witch Hunt. He won’t sue!”

Mr Brennan did not threaten to sue Mr Trump personally but to make a case in court that Mr Trump had abused his executive power by revoking his security clearance in response to criticism – Copyright The Financial Times Limited 2018 (Additional reporting: Guardian)