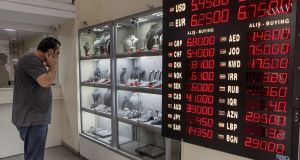 A customer views jewelry alongside a display of international currency values at an exchange in Istanbul. Photograph: Ismail Ferdous/Bloomberg

Turkish Cypriots will mark Muslim religious festivities this week in fear and trepidation as the tariff war between Ankara and Washington has accelerated Turkey’s economic meltdown. The Kurban Bayram, or Feast of Sacrifice, finds Turkish Cypriots trapped by their intimate connection to Turkey.

Ankara occupied northern Cyprus in 1974, following an attempted coup by Greece’s junta, and has since dominated the north’s economic, political and socio-cultural life.

The 130,000-strong Turkish Cypriot community suffers doubly from the 45 per cent plunge this year in the value of the Turkish lira, the currency circulating in the north. Ankara, not north Nicosia, sets the exchange rate for the lira and dictates measures meant to stem its fall.

Since salaries, pensions and social welfare payments are in lira, the purchasing power of the majority has shrunk dramatically. While local products trade in lira, imports from and via Turkey, including food, cars and spare parts, medicine, computers, fuel and a host of other items, must be paid for in euro, dollars or sterling.

Since north Cyprus depends on Turkey for most of its food and essential supplies, paying in foreign currencies for Turkish products is particularly onerous. The north’s trade deficit for 2017 was $1.67 billion.

Due to the sinking lira, landlords demand rents in foreign currency and banks are restructuring loans as monthly interest could be higher than salaries. Fearful residents have withdrawn savings. Construction projects have been suspended due to the lack of foreign currency to buy raw materials.

Some suppliers have halted deliveries while others have boosted prices, forcing retailers to pass on rising costs to consumers, fuelling inflation and insecurity as there seems to be no end to Turkey’s economic crisis.

Consequently, residents of the north have curbed spending at a time of year when they normally hold lavish celebrations, instead conserving the foreign assets they hold, their hedge against insolvency. Few Turkish Cypriots now cross the dividing line into the internationally recognised Cyprus republic to shop in supermarkets where choice is greater and prices for some goods are lower. They cannot afford to pay in euro.

The Turkish Cypriot authorities have struggled to contain contagion, but they have no influence over Turkish president Recep Tayyip Erdogan’s economic policies. Seeking to avert panic, the Turkish Cypriot central bank claims it has enough foreign cash to weather the lira storm and has deferred loan payments to those who borrowed in foreign currencies.

Palliative measures include lowering VAT on food items, fixing exchange rates for rents and private school fees and pricing electricity according to consumption. But these measures are seen as simply means to give the public the feeling that the politicians are taking action where none is possible.

Turkish Cypriot resentment over Erdogan’s mismanagement of the mainland’s economy has been compounded by two factors. They are angry over his drive to transform secular Turkish Cypriots into devout conservatives by promoting religious education and building mosques, and they fear he is extending to north Cyprus his crackdown on dissent and threatening Turkish Cypriot media.