Trump has made many Americans feel connected again

Trump – one year on: Those who voted for him are still optimistic – and in Erie, Pennsylvania, a former Obama stronghold, they would do so again 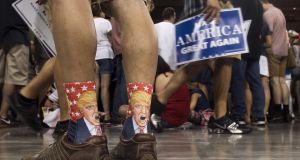 The populism that swept Donald Trump into office has not shown it is going to ebb anytime soon. Photographer: Ty Wright/Bloomberg via Getty Images

Frank Victor sits at the head of the conference table at Fralo Industries, the high-tech sheet metal manufacturing plant in downtown Erie, Pennsylvania, he owns with his brother Mike – who is now the president of Mercyhurst University – a prestigious private Catholic university located within the city limits.

Across from him is John Bauman, the president of the manufacturing company and a minority owner. Both men are highly educated, successful businessmen who have left this city – which has arguably seen better days – throughout their careers, but returned to invest and be part of pushing its renewal.

A process both men admit will be long.

They both voted for Donald Trump last November and were part of the movement in Pennsylvania and across the Rust Belt that flipped traditional Democratic counties like Erie from Democrat to Republican; a flip which helped push Trump over the top to win the presidency.

And they would do it again.

“In a heartbeat,” said Victor, 54, as he gives a tour of his factory that employs 68 locals in well-paying jobs, something hard to come by in America’s Rust Belt.

Victor and Bauman are the type of American voters who were hiding in plain sight for the American news media and political strategists to see – but didn’t. Not because they weren’t available, not because they would not have admitted they were going to vote for him – but because much of the media and political class, both Democrat and Republican, could not understand why they would, so they didn’t ask.

Twelve months later they still don’t understand why they did.

In fact much of the US is still stuck in a singular moment in politics; for the most part it is still November 8th, 2016 around midnight. If you voted for Trump, you are still excited and still optimistic about his presidency. If you didn’t? You still believe it must be illegitimate; you either still believe the only reason Trump won was because of Russian interference or because former FBI director James Comey’s late actions cast doubt.

And you also still make the point often – no matter where a conversation heads – that Trump did not win the popular vote.

The question is why?

Erie County, Pennsylvania, is likely one of the best places in this country to explain exactly that.

This is a county that not only voted for Barack Obama twice – they voted for him unanimously. They also voted for John Kerry over George W Bush. They voted for Al Gore over Bush, and for Bill Clinton over both Bob Dole and H W Bush – in fact the last time they voted for a Republican was for Ronald Reagan.

So to break that streak of solid Democratic support means something – and it means the same thing in all of the other counties in this country that voted for Obama twice and then Trump.

Trump’s ability to connect during the election as well as remind people since he was sworn in as the 45th president of the US that he is fighting for them, is appealing to an area that has declined considerably under Democratic rule both economically and in population.

All you need to do is drive through parts of the city to witness first-hand the carnage that Trump spoke of in his inaugural address.

For them “Make America Great Again”, Trump’s campaign slogan, was aspirational. It made them feel connected to something bigger than themselves.

They were also tired of reporters and the Democratic Party telling them every time they disagreed with their policies that their values were out of whack because they were pro-life, or were dangerous because they owned a gun or were racist even though they voted for Obama twice.

They know Trump is not perfect, but they also know that what they have been voting for, for years isn’t either

The reason no one in the press saw this, or heard this or understood this is because the concentration of reporters covering national politics – live in areas of  the country where they experience none of these concerns or hold these values.

In New York City or Washington DC jobs are plentiful, the main streets are filled with a variety of stores, restaurants, coffee shops and there are lines to get in all of them. And there are more jobs than people. In the Eries of this country their main streets are filled with shuttered businesses, abandoned homes. The scars of the opioid crisis are everywhere and good jobs are scarce.

To understand what happened in the US is to understand Erie, Pennsylvania. In The Great Revolt my upcoming book with co-author Brad Todd we travelled by car on the backroads using no interstates to many of the signature counties in the Great Lakes Rust Belt that voted for Obama twice and then Trump – Erie was one of those counties.

Voters here and in all of the other Great Lakes Rust Belt states like Pennsylvania, Ohio, Michigan, Iowa and Wisconsin who placed Trump in office still view Trump essentially as this figure not attached to the trappings of the Republican or Democratic Party; they liked him last November, they still like him today.

And based on the way Americans have rejected cultural institutions’  behaviour towards them like the NFL and Hollywood – a sentiment that helped carry Trump into office – the populism that swept him into office has not shown it is going to ebb anytime soon.

It’s not hard to understand what happened in America last November if you spend a few days in the Eries of this country – and get to know the people and listen to their concerns. They know Trump is not perfect, but they also know that what they have been voting for, for years isn’t either.

As long as he does not become part of the swamp they voted against, they still have his back.