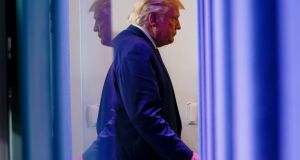 US president Donald Trump leaves a news conference in the White House on Friday. Photograph: AP

The row over Donald Trump’s alleged remarks denigrating American soldiers has now seen the US president target one of his core areas of support as he called for a Fox News journalist who reported details of the scandal to be fired.

The Atlantic magazine published a story which described how Mr Trump said he cancelled a visit to pay respects at an American military cemetery outside Paris in 2018 because he thought the dead soldiers were “losers” and “suckers”. Other outlets confirmed the news and detailed more incidents of Mr Trump’s insulting attitude to American soldiers.

Among those was the Fox News national security correspondent, Jennifer Griffin, who confirmed in a Twitter thread that Trump called soldiers “suckers”, had questioned why anyone would want to become a soldier and had not wanted to honour war dead at the Aisne-Marne cemetery in France.

Amid furious denials of the story from the White House and Trump allies, Griffin’s reporting probably touched a nerve as it came from the usually reliably pro-Trump Fox News, whose conservative leanings and pro-Trump opinion show hosts are reliable cheerleaders for the president.

In a tweet Mr Trump said: “Jennifer Griffin should be fired for this kind of reporting. Never even called us for comment. Fox News is gone!”

The White House has moved to deny the report unusually forcefully perhaps fearful of the scandal’s impact on military-supporting conservatives. Mr Trump himself dismissed it as a politically motivated “hoax”.

“There is nobody feels more strongly about our soldiers, our wounded warriors, our soldiers that died in war than I do,” he told reporters at the White House on Friday. “It’s a hoax,” he said on Friday night.

The first lady, Melania Trump, also weighed in, in a rare political intervention tweeting that the Atlantic story “was not true”.

“When my son volunteered and joined the United States military – and went to Iraq for a year, won the Bronze Star and other commendations, he was not a sucker,” Mr Biden said in emotional remarks in Wilmington, Delaware.