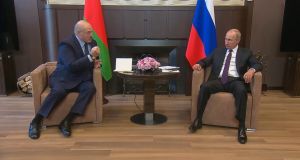 Belarusian president Alexander Lukashenko has received pledges of financial help and potential security assistance from Russian counterpart Vladimir Putin, as the former seeks to shore up his autocratic regime against the biggest crisis of his 26-year rule.

They met in the Russian Black Sea resort of Sochi on Monday for their first face-to-face talks since Mr Lukashenko claimed victory in a disputed election last month, sparking huge rallies and a brutal police crackdown on peaceful protesters.

At least three people have died, hundreds have been injured and about 10,000 detained during the demonstrations, while protest leaders have been arrested or forced out of the country. Strike action has added to economic uncertainty in Belarus, driving down the value of its rouble and draining hard currency reserves.

The former Soviet state farm boss has responded by courting traditional ally Russia, while accusing the West of orchestrating the protests, threatening Belarus militarily and plotting to oust him and further erode Kremlin influence in the region.

“We agreed that Russia would provide Belarus at this difficult time with state credit of $1.5 billion (€1.26 billion),” Mr Putin said.

“Russia remains committed to all our agreements,” he added, in reference to the “union state” deal on gradual economic integration between Russia and Belarus, and Moscow’s commitment to preserve its neighbour’s security and “stability”.

“We regard Belarus as our closest ally and without doubt ... we will meet all the obligations we have undertaken.”

Mr Putin revealed late last month that in response to a request from Mr Lukashenko, he had formed a special police unit in Russia that would be deployed to Belarus if protests there turned violent.

Using a term he often chooses to describe Russia and Mr Putin personally, Mr Lukashenko said: “All these events have shown that we need to stick closer to our ‘big brother’ and work together on all issues.”

Referring to their nations as “one people”, he thanked Mr Putin for vowing to defend Belarus from the military threat that he claims – without offering evidence – is posed to his country by neighbouring EU and Nato states Poland and Lithuania.

“I am very pleased and grateful to you for showing that the Belarusian border is the border of the union state. And no one is allowed to rattle their weapons there.”

Mr Lukashenko has proposed to reform the Belarusian constitution and then hold new presidential elections and, although his opponents reject it as a cynical ploy to buy time, Mr Putin called it “logical, timely and appropriate”.

“We want Belarusians themselves, without prompting and pressure from outside, to sort out this situation in a calm manner and through dialogue,” he said.

Opposition leader Svetlana Tikhanovskaya, who insists she won the election and fled to Lithuania after allegedly being threatened by the Belarusian regime, warned Mr Putin in a statement that “all agreements signed with an illegitimate Lukashenko will be revised by the new leadership” of her country.

“I am very sorry that you have decided to engage in dialogue with a usurper and not with the Belarusian people,” she added.