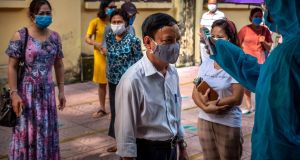 In a world plagued by pandemic, Vietnam seemed like a miracle. As months went by without a single recorded coronavirus death, or even a confirmed case of local transmission, residents began leaving their face masks at home.

But over last weekend, Vietnam, which had gone about 100 days without a single confirmed case of local transmission, announced that the virus was lurking in the country after all – and it was spreading.

First, a 57-year-old man from Danang tested positive for the virus and is now on life support. Then clusters quickly emerged in five hospitals. By Wednesday, the virus had spread north to Hanoi, the capital, south to Ho Chi Minh City and afflicted two provinces in central Vietnam, as well as the remote Central Highlands.

On Friday, the official Vietnam News Agency said that a 70-year-old man who appears to have contracted the disease in Danang had died – the country’s first official death from Covid-19.

The surge of coronavirus in Vietnam revealed the dangers of the virus even in places that appeared to have done most everything right in their battle against contagion. Japan, China, Australia and South Korea, all of which seemed to have their outbreaks reasonably under control, recorded spikes on Wednesday. In the Australian state of Victoria, authorities announced 295 new cases on Wednesday, along with nine new deaths.

Hong Kong, which kept its caseload low for months, is now racing against a wave of new infections, sickening about 100 people a day. With infections turning up in nursing homes and restaurants, Carrie Lam, the territory’s chief executive, warned that Hong Kong was “on the verge of a large-scale community outbreak”.

Until Friday, Vietnam, a nation of 95 million people, was the largest country in the world to have not confirmed a single fatality from the coronavirus, but the mystery surrounding the infections popping up across the country has spooked medical experts and residents alike.

“In my opinion, this outbreak is more dangerous than the previous one because it is happening at the same time in many places,” said Nguyen Huy Nga, dean of public health and nursing at Quang Trung University in Binh Dinh province. “We do not know the source of disease, especially with tens of thousands of tourists flocking to Danang.”

Vietnamese authorities have reacted to the latest wave of cases with the kind of fast and forceful response that characterised their actions in the early days of the pandemic. Hours after clusters of cases were confirmed in Danang hospitals earlier this week, officials said they would be shutting the city’s airport. Up to 80,000 local tourists who had flooded the city for a summer break would be evacuated, authorities said.

Since then, several provinces have instituted quarantines for arrivals from Danang, and the dragnet has already turned up positive cases. A waiter at a pizzeria in Hanoi tested positive for coronavirus after visiting Danang with his family, local news media reported. On Wednesday, the pizzeria was sprayed down with disinfectant by workers in protective gear, according to a video released by local news media.

In the Central Highlands, a 21-year-old woman who had been studying in Danang and returned home by car also tested positive. In Danang, a normally bustling city popular with tourists and traders alike, restaurants and bars are closed. Face masks are mandatory again. With holiday swimming in the sea banned by local authorities, the city’s famous beaches were deserted on Wednesday, residents said.

“My family and I are not in the area where people are infected, but I am very worried,” said Le Thi Thuy Vi, a grocer in Danang. “I decided today that the whole family should stay at home.”

As coronavirus began radiating out from the Chinese city of Wuhan in January, Vietnam, which shares a border and a governing ideology with China but remains wary of its northern neighbour, moved swiftly. The country had learned from previous outbreaks of novel contagions, such as severe acute respiratory syndrome and H1N1 influenza.

By late January, Vietnam had shut its schools. A bureaucracy well-equipped to track the local populace turned its attention to comprehensive contact tracing. Most Vietnamese, already conditioned to wearing face masks because of air pollution, saw the value in protecting themselves from airborne viral droplets.

After a woman returned from the fashion shows in Europe and helped to spread coronavirus at home, Vietnam stopped nearly all international flights in March, and returning nationals have to undergo quarantine in government facilities.

On Wednesday, 120 Vietnamese hydropower project workers arrived on a government charter from Equatorial Guinea, where they had contracted coronavirus. It is the largest contingent of infected returnees to take a government-sponsored repatriation flight, the Vietnamese foreign ministry said.

Last week, Vietnam effectively banned the wildlife trade, amid fears that the trafficking of exotic fauna might have precipitated the emergence of the latest outbreak. Vietnam is both a consumer of illegal wildlife products and a transit point of endangered animals destined for China across its shared mountainous border.

With no clarity as to the source of the outbreak in Danang, which has infected at least 26 people there, medical authorities were racing to figure out how cases were proliferating in a supposedly closed country. The health ministry said that the strain of virus detected in Danang is different from ones that circulated during the earlier round of local transmission.

“This is imported,” said Nga, the public health expert at Quang Trung University. “A virus cannot survive for three months in a community without causing illness.”

Nga said he thought the virus likely arrived in Vietnam in late June or early July. In Danang, police fanned out across the city, trying to locate outsiders who might have brought the virus with them.

Last Saturday, police apprehended nine Chinese nationals who had sneaked into Vietnam illegally, local authorities said. Dozens more Chinese who had entered the country illegally were nabbed earlier this month in central Vietnam. A Chinese man, whom police said had set up an illegal immigration network, was arrested on Monday.

The Chinese who were caught were either put in quarantine camps or isolated in hospitals, police said. Across Vietnam, hospitals were getting beds ready to handle a rise in cases.

Nga noted that ventilators and other equipment needed in the fight against the coronavirus are limited in Vietnam. People, he said, had become complacent. “After 100 days with no outbreaks, people weren’t taking precautions anymore,” Nga said. “They weren’t wearing masks or cleaning their hand with soap. People were going to crowded places.” – New York Times